The train from Berlin to Warsaw was less than eventful. The train was direct, I had some music, and they were handing out free water. Couldn’t be easier.

After a simple airbnb check-in, I scoped out a route to the tourist area full of restaurants I remembered from my previous trip, and headed out to find some dinner.

At the recommendation of a polish friend, I knew I wanted this to be my first meal on my return to warsaw (I didn’t go during my previous trip).

Stepping inside felt like entering a polish take on a chinese dimsum restaurant, but inside a tiny old gambling hall cleared of slot machines and video poker. 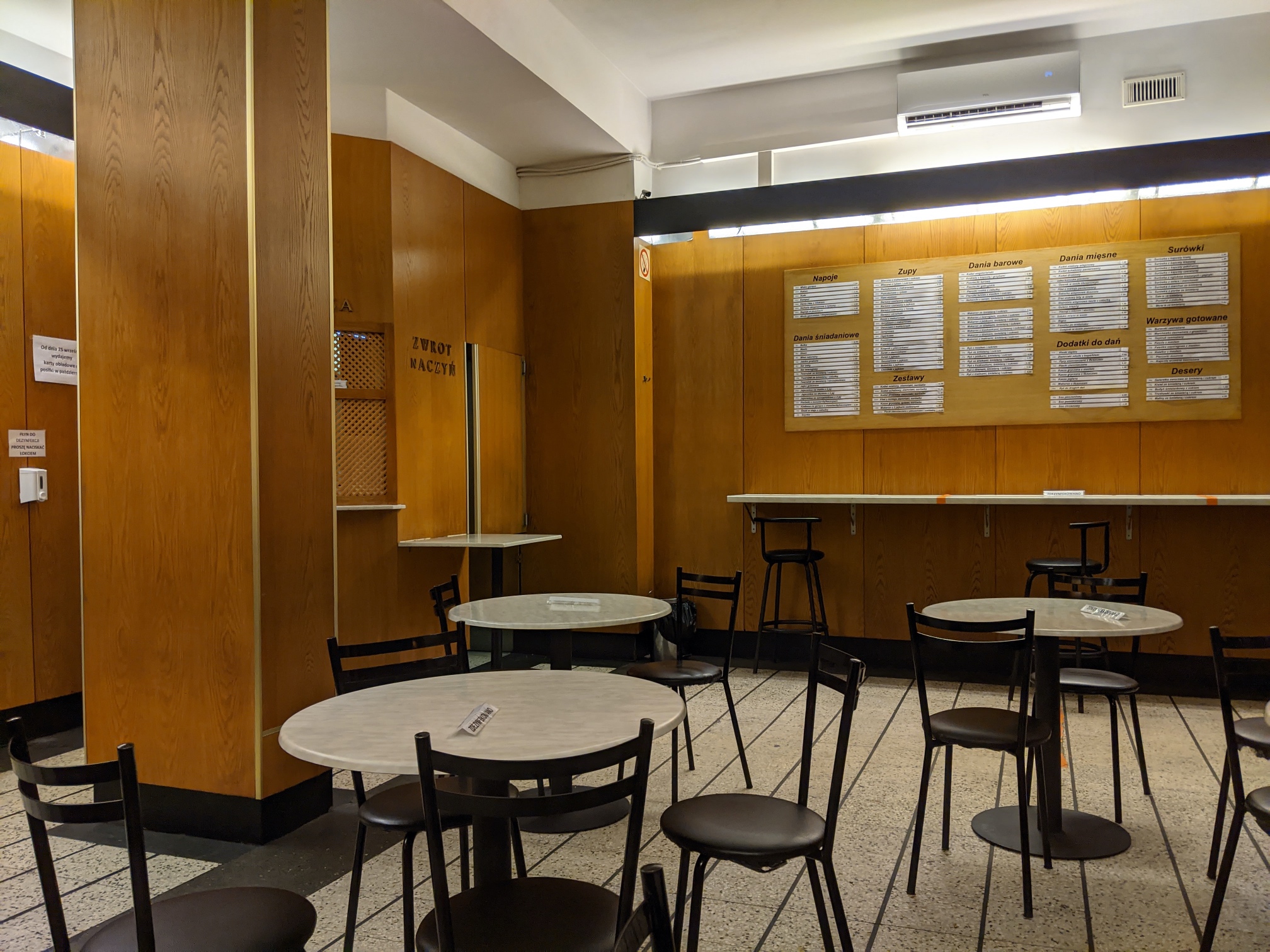 The inside of the milk bar. It was pretty empty.

I stood contemplating the expansive, all polish, wall-mounted menu and remembered I didn’t know any polish. I could pick out the soups (zupy), cutlets (kotlet), and pierogi (pierogi), but other than that I was lost.

As I pretended like staring at the menu would reveal to me the meaning of the menu items, the old guy from before walked into the milk bar and asked me again for soup. Seeing that it was only one euro, I said I would get it for him. I tried to ask him what I should get for myself. He seemed to understand what I was getting at, so we walked over to the order window and I tried to say the name of something that he had recommended to me. 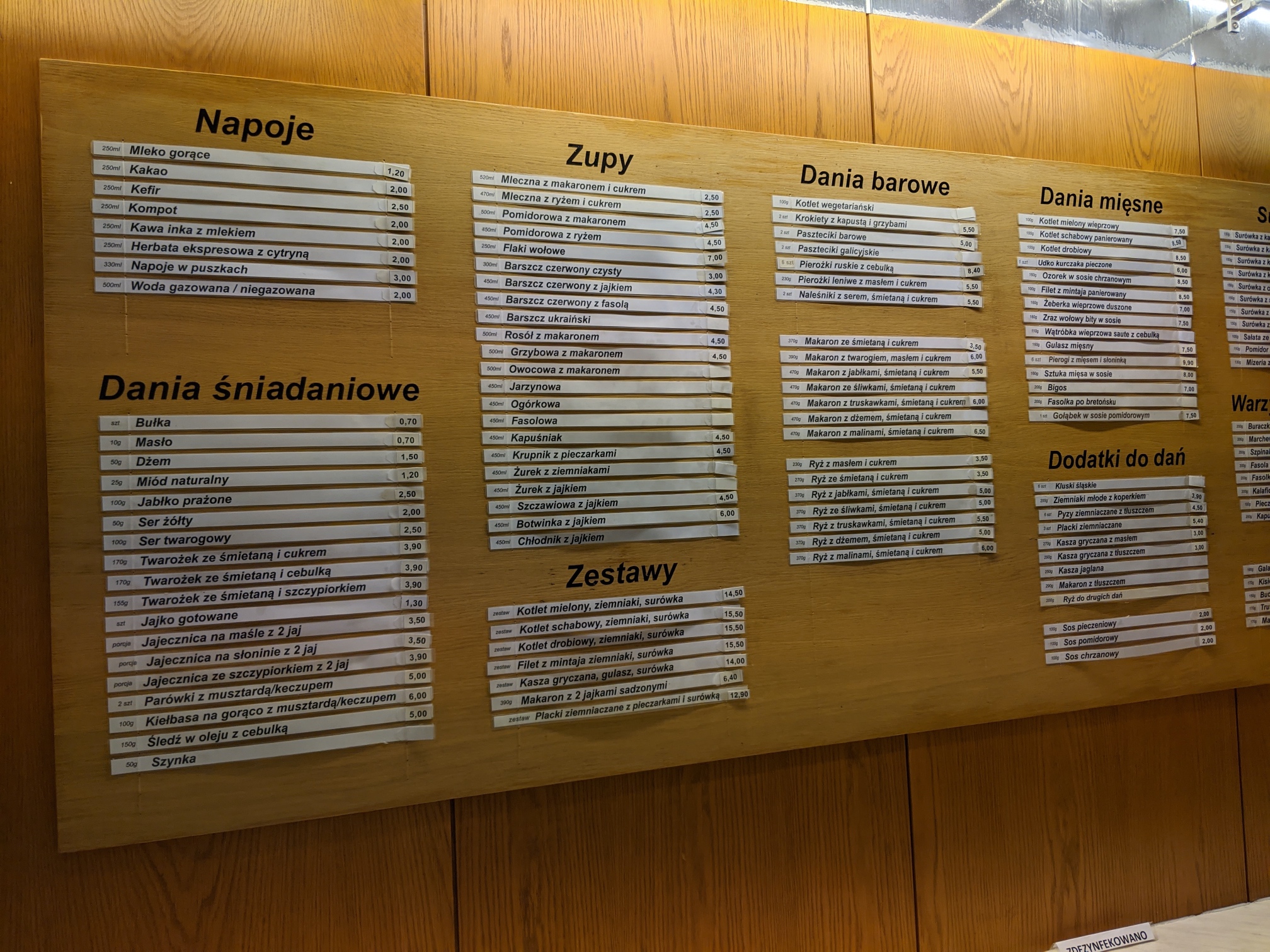 The menu. I had no idea what I was reading.

I butchered the pronunciation so badly that the old guy started laughing out loud. He took over and ordered his soup, and then a cutlet and pierogi for me. He asked if I wanted a drink. I said “piwo?” hopefully (piwo is the word for beer in most eastern european languages), but he laughed again. Apparently there’s no beer in the milk bar. They asked if I wanted a pepsi but I decided against it.

I paid and we shuffled over about three feet from the order window to the pickup window. The old guy started talking to me in polish. At one point he appeared to ask if I were english. I told him I was american. He did a bit of a face palm, kept talking in polish, and seemed to start in on a short diatribe about how covid-19 doesn’t exist or is overblown. I nodded along, able to neither agree nor deny any of his claims. His soup was ready first, so he grabbed it from the window, went to a table, sat down, and ate. My food showed up a couple minutes later. I sat at a different table.

When he finished his soup he thanked me and left. I checked my phone and saw that both my meals and his soup cost seven euros. 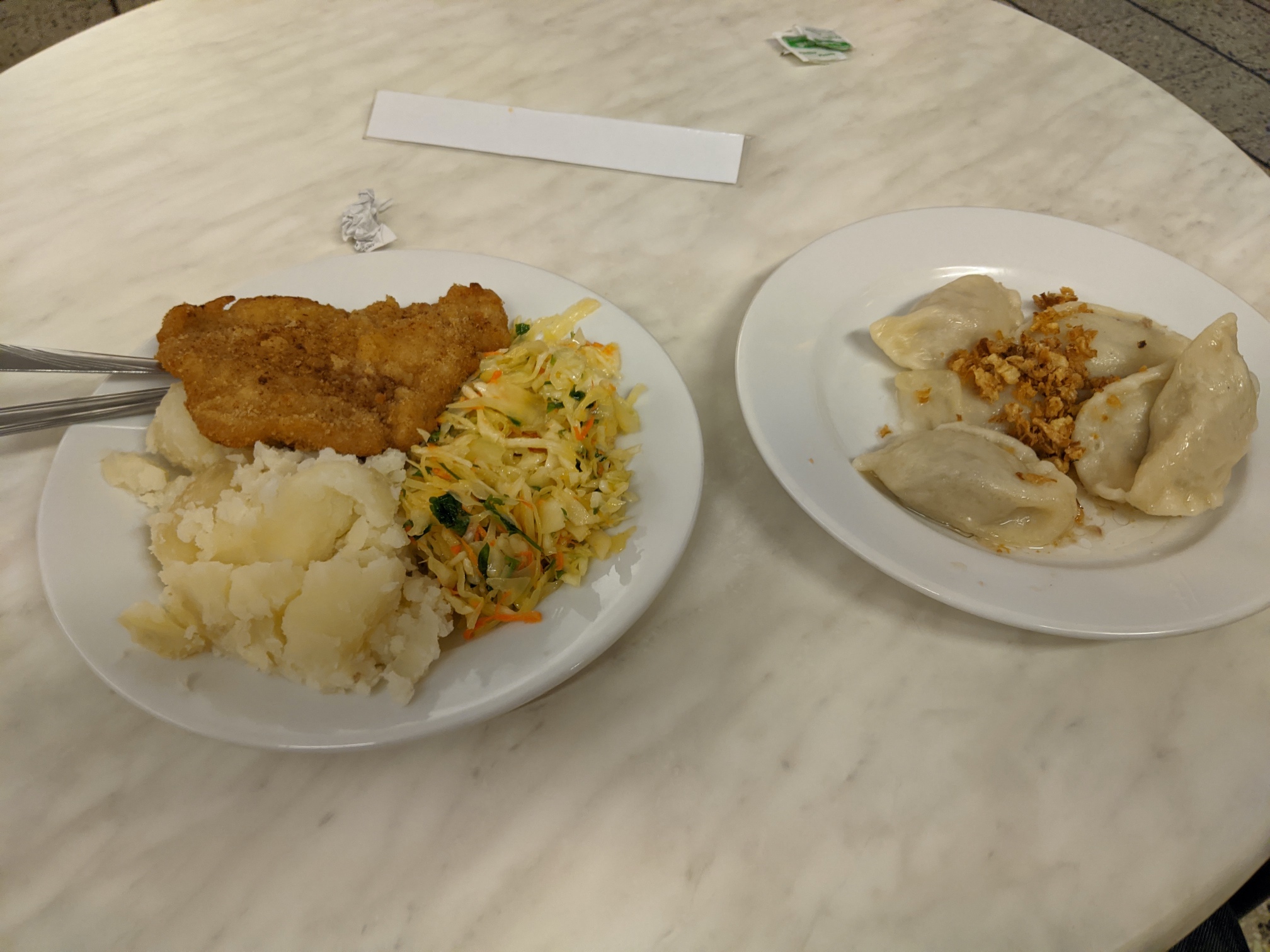 I enjoyed this meal quite a bit, despite its complete lack of color.

I bought a couple beers on the way back to my airbnb and settled in for the evening.