I had a tattoo appointment today.

On my tattoo selection

I originally wanted a tattoo for my proposed trip to vietnam, which was meant to be happening at this point in time.1 As that trip had been scuttled and I still wanted a tattoo, I started looking through a best tattoo shop list for warsaw. I looked through dozens of artists' instagram pages.

I didn’t know what I wanted. I have a short list of tattoo ideas I’ve been growing the last few years, but I feel no pressure to get them.2

Looking at the instagram pages, I was blown away by the quality of the tattoos these artists were putting out. Warsaw is home to some supremely talented people. For comparison, I had done a similar search for artists in salzburg and was underwhelmed. Poland does it better.

I’ve had on my tattoo list some sort of odin the wanderer / gandalf character for a while. All the tattoo examples I had seen were always too detailed or too big for my personal taste. As I was scrolling through another instagram profile (I had easily gone through over a dozen at this point. I can usually dismiss an artist as ‘not my style’ immediately, but still enjoy looking at their work), I came across a style that was mostly borderless shading. Very cool. I immediately loved the style, and as I scrolled further, I encountered a fantastic gandalf that fit my taste perfectly: black and gray, simple but with great shading, and unquestionably gandalf while still maintaining a wonderful economy of lines. I had already made up my mind to contact the artist, but continued scrolling and found a delightful character that had the same key iconography as gandalf – pointed cap, cloak, traveling pack. The artist had done several cool variations. I decided I wanted one without even knowing who this little wanderer was.

I shared the image with friends and a swedish one exclaimed “Snusmumriken!”

Turns out he’s a swedish/finnish children’s book character, a wandering nomad with only the possessions on his back. It was perfect. I read one of the books and saw no reason not to get him. His name in english is Snufkin.

Tattoo time. I was excited, to say the least. I walked into the shop, had my temperature taken (covid), filled out the waiver forms, and sat down with the artist to go over the sketch she had drawn.

When we spoke on instagram I initially wasn’t really sure what I wanted. Having had a week to mull it over I had changed my mind a bit. Working with Ola, the artist, was so cool. She had the sketch on her iPad. As we spoke she highlighted layers on the sketch, deleted parts, changed others – it was all so fluid. It was very cool to see her work and be a part of the process as it happened. 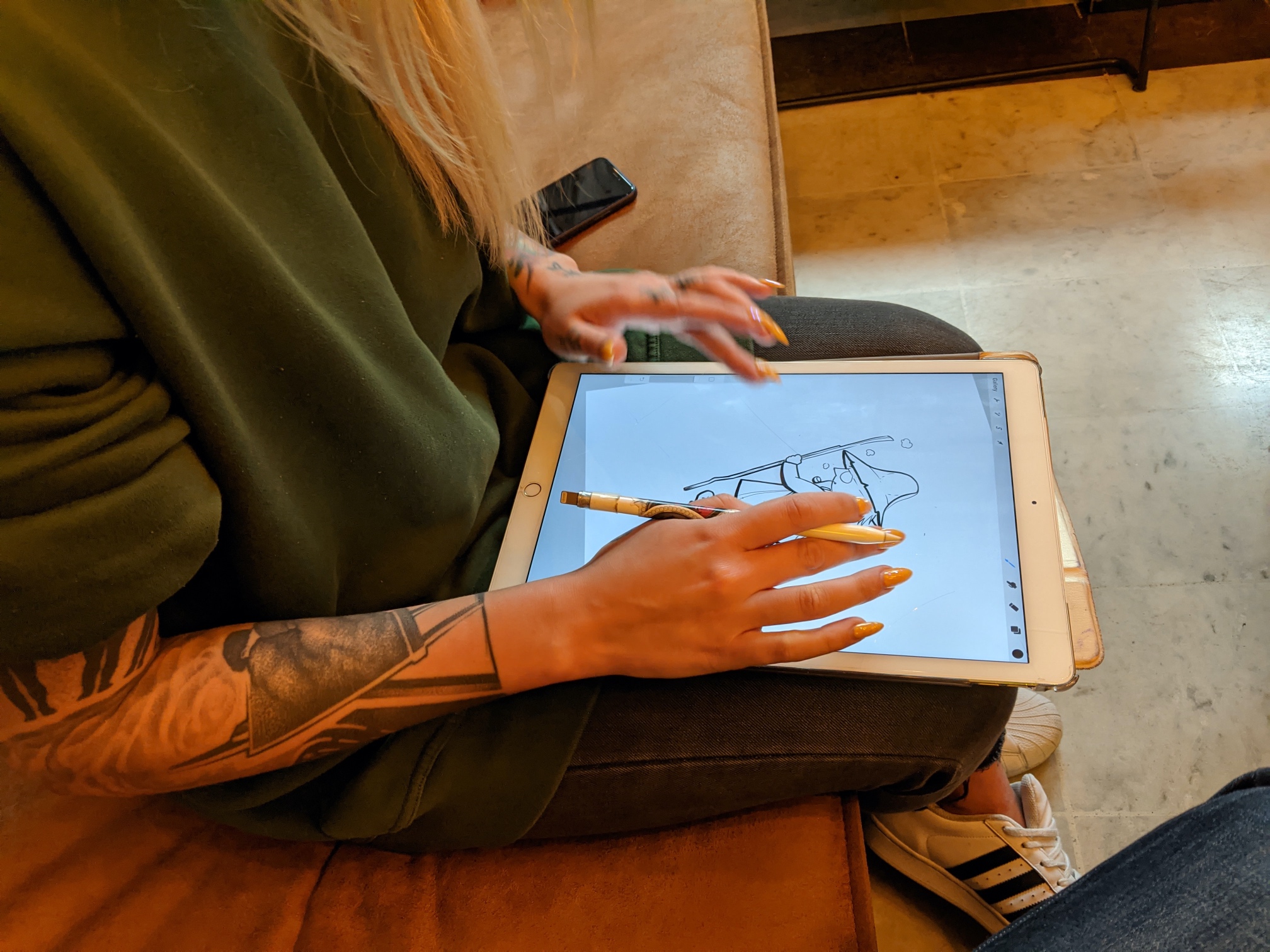 Live sketching. Having her make suggestions, rotate the sketch, and show changes, was really cool.

We finished the design, she printed out four sizes, and I looked at how they sat on my thigh. Originally when we spoke I gave her the option of the side of my ribs, or my thigh, and she chose thigh. Something about the placement wasn’t doing it for me, though. I took one of the print-outs and placed it on the inside of my calf. It fit great, sitting right on the muscle and not spilling over on to my shin bone. I also really liked the idea that as my calf flexed while I walked, he would be walking too. Ola flipped the image and printed it out (reflection over the y-axis), and we headed in to the studio.

Ola was shy about speaking english at first. When I told her I was american she was mortified that she would have to talk with a native speaker in her imperfect english. I was totally cool about it, and even enjoyed how we had mime words to each other, and she relaxed pretty quick when she realized I was having fun.

We seemed to develop an easy back and forth conversation immediately. At the start she was laughing so much I was wondering how my tattoo was going to turn out.

Her tattoo machine was wireless. I had never seen that before and told her how cool it was. She asked me if I had ever used one. I said no. She asked if I wanted to try. I said of course.

She gave me gloves and showed me how to hold my skin taut for tattooing. I held the tattoo machine and, not knowing what to draw, opted for a little line above the stencil of snufkin on my calf. She told me I needed to put the needle deeper into my skin. So I did another line. Well, I had come this far, so I did two more. It didn’t hurt. Afterwards I handed the tattoo machine back and she resumed tattooing, I watched more closely how she did it (funny that I had never really paid attention after already having five tattoos), like how she stabilized her hand by holding her pinky out on my leg. I made a mental note to do that the next time I tattoo myself, and not just have my arm free in the air. 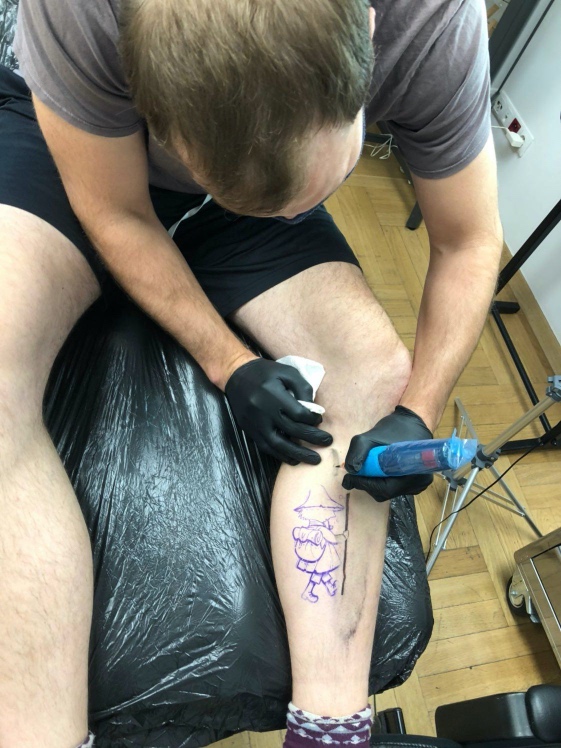 I saw no reason not to do this. It actually didn't hurt.

“You can’t ask that! You can guess. But be nice."
Ola waves tattoo machine threateningly
“If I don’t like your guess, I draw sad little dick next to Snufkin."
“Erm, 27?"

She did not draw a sad little dick next to Snufkin.

After relating this story to a friend, he asked “did you tell her you already had one?”

We talked about our families, their expectations, our lives (she bought a camper van and is planning on just living out of it and driving it around europe), books, movies. She got really shy again when a coworker came into the room where we were. She was embarrassed about her english when she didn’t need to be.

She had my try to repeat some polish phrases, including polish tongue twisters. She and her coworker were laughing out loud at how bad I was. She even started crying she was laughing so hard. She said she would make a recording of me and listen in the mornings when she got up.

This was easily the best experience getting tattoo’d that I’ve had. I think she had an awesome time too. She gave me a big hug when I left, and told me to message her on Sunday and she’d show me around. 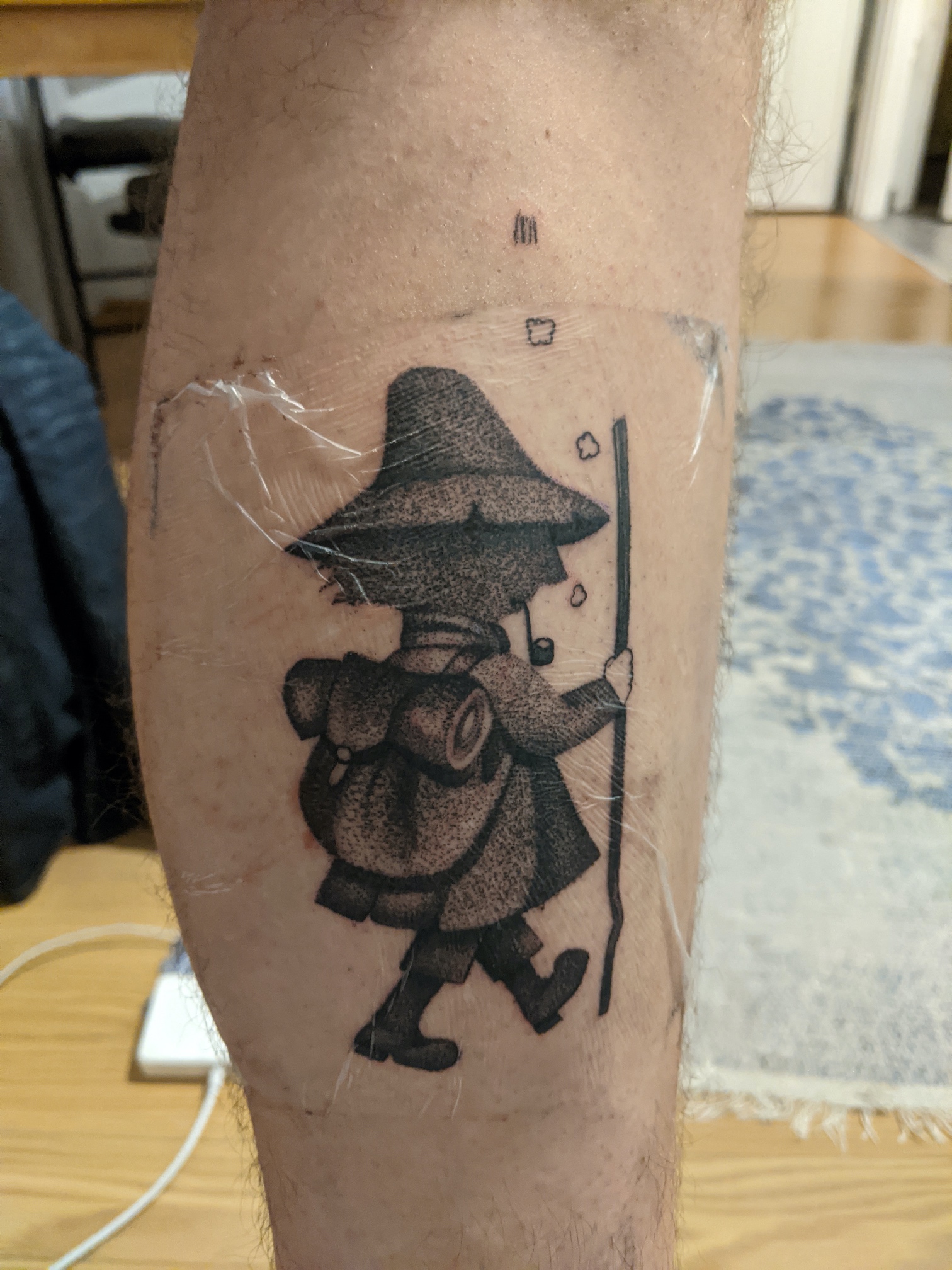 I can’t imagine anyone not having a great time in Poland. The people, the food, the history, the culture. It’s a really great place. Ola told me during my tattoo that she had a different appointment for that day, but because the person lives in Warsaw, she had bumped it to two weeks later so I could get my tattoo.

As I was leaving I checked my phone. A friend had sent me several recommendations for places to eat. At this point pizza sounded really good. I decided to go to nonna pizzeria, which was great.

Feeling like it’d be good to get out, I found a cocktail bar that looked cool. It was steampunk-themed. The cocktails were excellent. 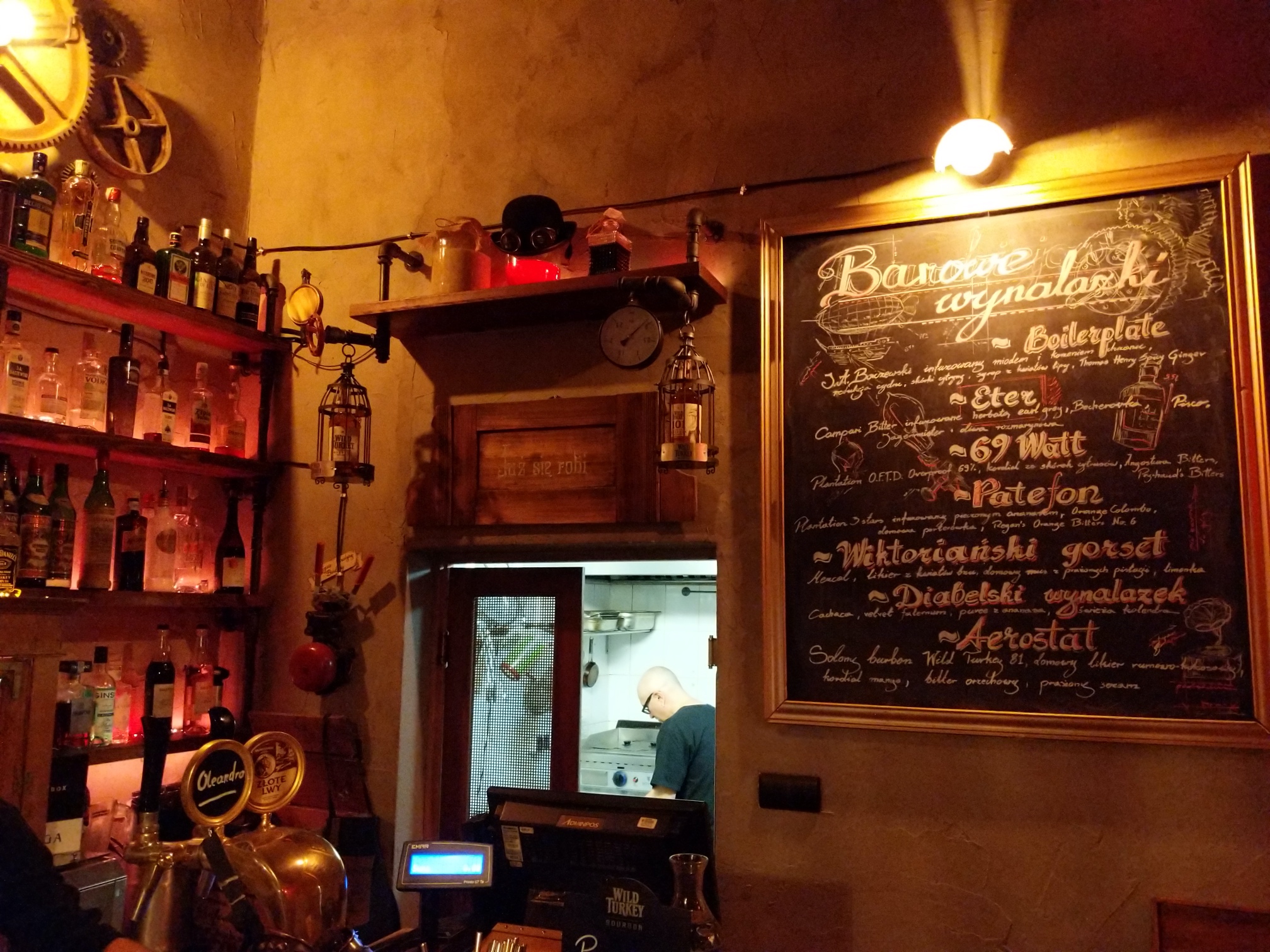 The bar. The whole thing had a very cool copper steampunk theme going on.

After a couple exceedingly good drinks, I headed back to my airbnb.