Long travel day. After a tearful goodbye with my hetero life partner Lukas, we were off to the races. Berlin HBF to be exact.

The train from HBF to Bad Oeynhausen (yeah, seriously) was easy. From there, transfer to a regional train to Düsseldorf HBF. This is where it got interesting.

Halfway through the three or so hour ride, there was a train blocking the track (between Oelde and Neubeckum). We got off a stop before Oelde, in Rheda-Wiedenbrück, for the replacement bus that would take us two stops further down the line, where we could catch the train and continue our journey.

When I get to the bus I’m told that my bike can’t go on the bus. Fuck. So I had to ride 22km to the station where I can pick up my train again. The next train leaves in about an hour, and it’s probably going to take me about an hour to get there.

I arrived just in time to see the train pulling away. Fuck. Fortunately the train leaves every hour, so I only have sixty minutes to kill. This definitely isn’t a world-ending delay, but between this pushing back my arrival time at my first campsite (probably in the dark), and the trip having just started, I wasn’t super thrilled.

The remainder of the trip, to Düsseldorf, and then from there to Aachen, was uneventful.

From here it was time for the bike trip to begin. I was riding to Lac Gileppe (around here-ish), 30km away. It was early evening and I should be able to reach my campsite before dark.

Aachen is not Berlin. It has massive hills, some I can’t even bike up, and I had about 2.5 hours until dark. I needed to make it through the city and get on my way.

Belgium, particularly Wallonia, is not Berlin. The ride at first was smooth highway. Quickly it turned into forest roads with some truly gnarly elevation gain. Again, I ended up pushing my bike.1

I reached the north western corner of the lake and followed a walking path down. After crossing a bridge with a huge stone lion (felt like an Argonath from Lord of the Rings), I continued following a route around the lake hunting for a spot to camp. 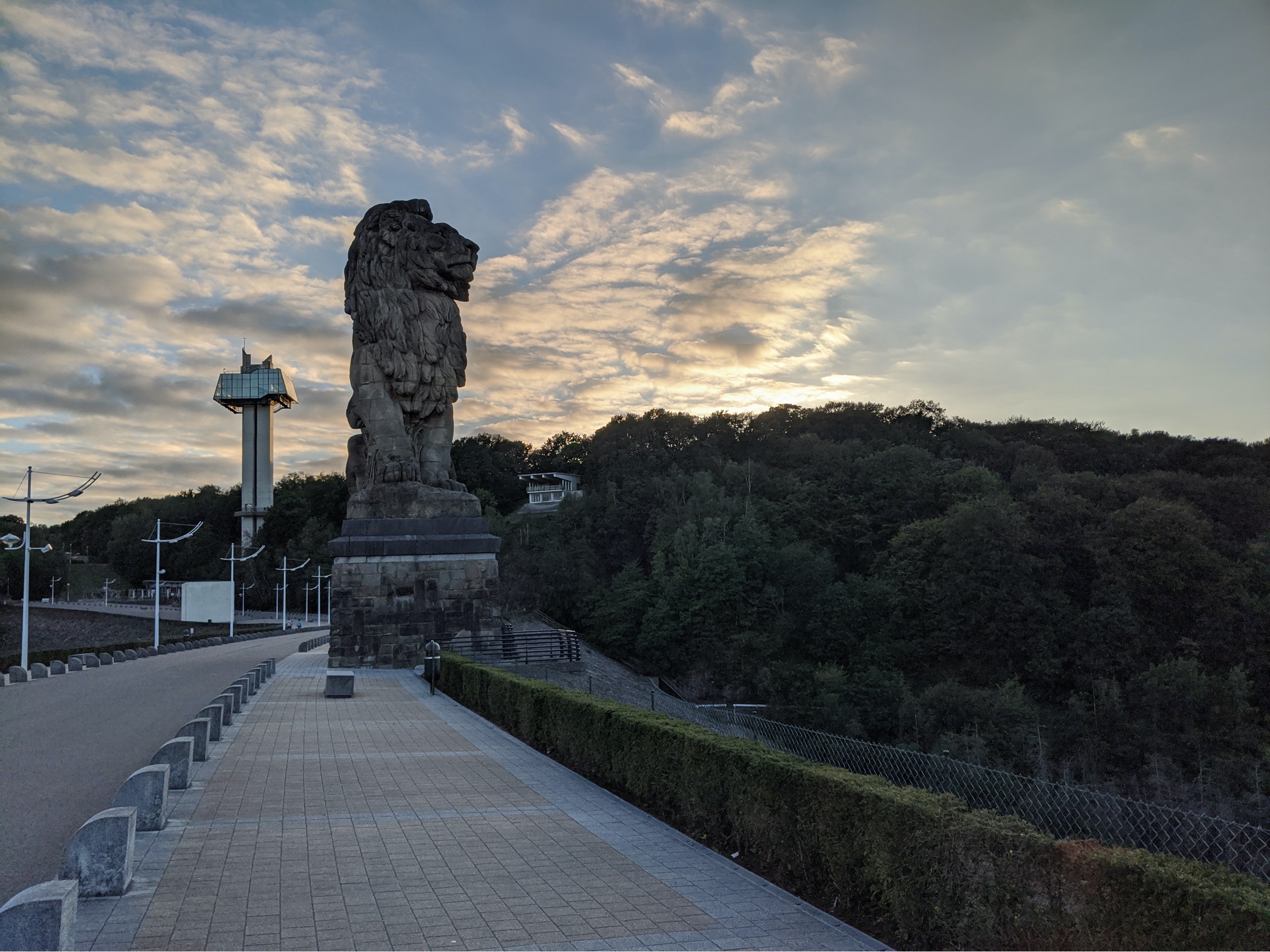 This lion looking out over the resevoir reminded me of the Argonath from Lord of the Rings.

After passing several places that all looked similar, I settle on one between the path and the lake. It slopes downhill, which won’t be a problem for my hammock.

I forgot how jumpy I am sleeping outside. My food was hung in a tree 20m from me, I was off the ground in a hammock, but every noise or rustle in the bushes made me start. I was pretty sure I heard somethings snuffling around in the underbrush. I growled at it.

The hammock does not insulate. I had all my layers on and still I was cold.2 It was about 8C. I inflated Fabian’s Thermarest and put it under me in the hammock. Instantly I felt warmer and was able to fall asleep.