I broke camp early and ate my leftover sandwich that I bought in Aachen HBF. It was bread and camembert, and would become my diet for the next three weeks (although I did not know this at the time).

The biking was brutal uphill. I had been “training” in the previous months, but 15 sets of 3min hill runs do not come close to preparing you for a 2.5 hour uphill grind. Looking back, maybe this would have been fine if I had known better how to shift my gears. It almost certainly would have been better if I hadn’t overpacked. These were lessons that I learned, but looking back, I was always going to make this first mistake. Having gone backpacking several times I tried to pack light but felt overconfident in how much my bike could hold.

The area I was in is dotted with small villages. There is no shortage of places to get food, but a lot of restaurants are closed on Monday, or Tuesday, or both. In addition to that, they have a break in the middle of the day during down times (2pm-6pm) when they aren’t open.

I had picked a restaurant for lunch only to discover that it was not open on this day. I wasn’t surprised, but still disappointed. I cycled further on to a place that was finally open and ordered a beer. I couldn’t decide between spaghetti bolognese and and cheese croquettes (small bits of cheese, breaded and fried). Deciding on the croquettes, allegedly more of the region, I knew I made the wrong choice when I saw the size of the bolognese. Should have gone with that.

Post-meal the path took a turn for the downhill. It felt really good, I was making a lot of kilometers, so when the path became extremely rocky and steep, I tried my luck on the bike. Following a lot of bouncing, I came out seemingly ok. A short flat ride later and I was on to the next rocky descent for a ride along the river.

I passed another closed restaurant and rode on further south. This time the rocks got the better of me. Reaching the flat part after about a kilometer of riding down, I realized my back tire was flat. It was damp by the river and the trail was not quite mud, and my shirt clung to my back. I had hoped to make it the entire trip without getting a flat.

I removed my bags from my bike, removed the tire, and then took off the innertube. I first tried patching the tire. After putting on a glueless patch over the small tear in the innertube, I found two more. I patched them. And then I found even more rips and decided to use a fresh innertube.

The pump I had with me I purchased for cheap in Berlin. It was not a good pump. After pumping up my new innertube, removing the pump also unscrewed the end of the pin, deflating the tire. I tried twice more to unsuccessfully inflate and remove my pump from the tire.

Now, sitting on the side of the damp path, I wasn’t sure what to do. I wasn’t near anywhere helpful and I couldn’t inflate my rear tire.

Four belgians on mountain bikes rode by, and I flagged them down for help. Amid handwaving and terrible french, I was able to explain to them what happened. They didn’t have innertubes that fit my bike, but they tried to inflate my innertube. My cheap pump had damaged the innertube so even they could not inflate my innertube.

They told me a bike shop to go to, and to walk back up the path to the closed restaurant and call for a taxi.

This sounds good in theory, but I knew my french would not be able to handle that. As I’m pushing my bike uphill and damaging my rear tire rim, I came across a car with a Netherlands license plate. I flag them down and speak with them in english. The young couple is friendly and helpful; the wife speaks french and calls a taxi service for me.

The cost for the taxi to come from Malmedy and then take me to the bike shop in Sourbrodt is 40 euros. It’s a 45min walk, so I opt to walk.

It was not a thrilling walk. I’ve been spending more time walking my bike than riding it at this point. I’m glad I opted to wear hiking boots for my ride.

Arriving at the shop I go inside and speak with a lady behind the counter, explaining in french that I need two innertubes and a pump. After buying them, I head outside to put on my new innertube. This is the third innertube I’ve put on my bike today.

New innertube on, I return inside to drop off the ruined tire. The french lady I spoke with was the only woman in the shop. As I walk in, I notice that all of the men working in the shop are speaking german. I was in a german speaking part of Belgium. That would have been helpful to know when trying to buy the new innertube.

I was tired and hungry and had no motivation to keep riding. I found the nearest campsite, thankfully only 15min away, and rode there. It cost 3 euros, and I couldn’t have been more relieved. I bought dinner at a nearby gastation. 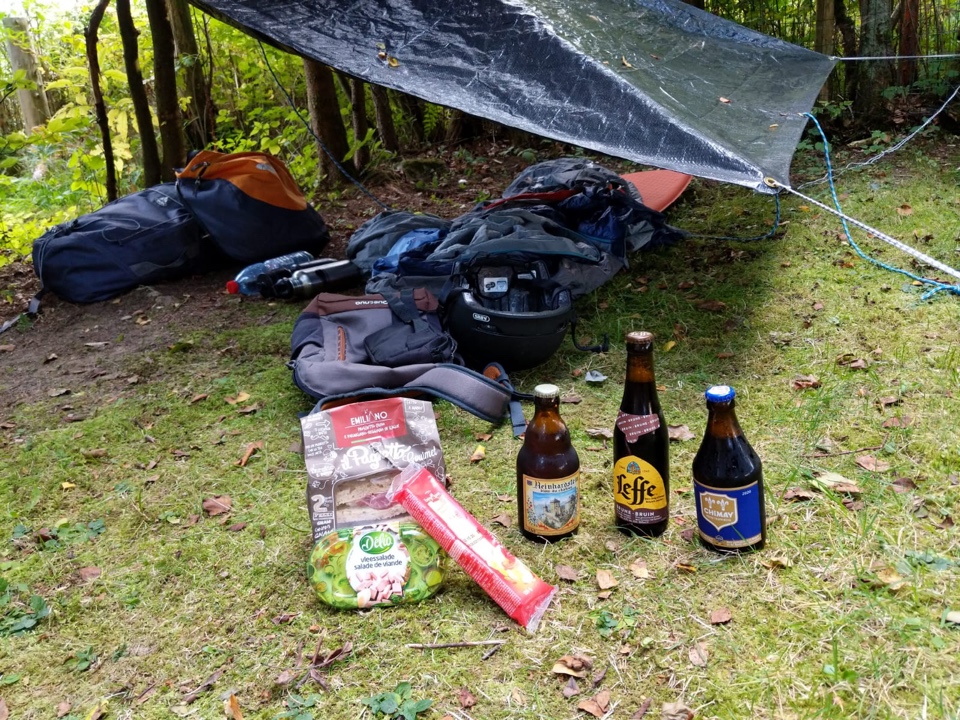 A meal fit for a king: beer, cheese, and gas station sandwich.

The hot shower and drinking water made the 3 euros well worth it.