Corneal and Joke left before I woke up. They were super nice; I was bummed I didn’t get to say goodbye.

The night before they told me to go to the tourist center and grab a RAVeL map, short for route à vélo longue. I had been following some of these routes without knowing it, and having an official map sounded like a good idea.

La Roche-en-Ardenne is such a cute town. I paid for two more nights at the campsite, planning to rest in town today and hike in the area tomorrow.

I sat in the cafe at the foot of the castle and read “Men without Women”, by Hemingway. I took a break while drinking my third chouffe to sketch out a rough plan (on smooth roads) for the next bit of my trip, and realized I had been imposing someone else’s bikepacking itinerary on my trip to Belgium. 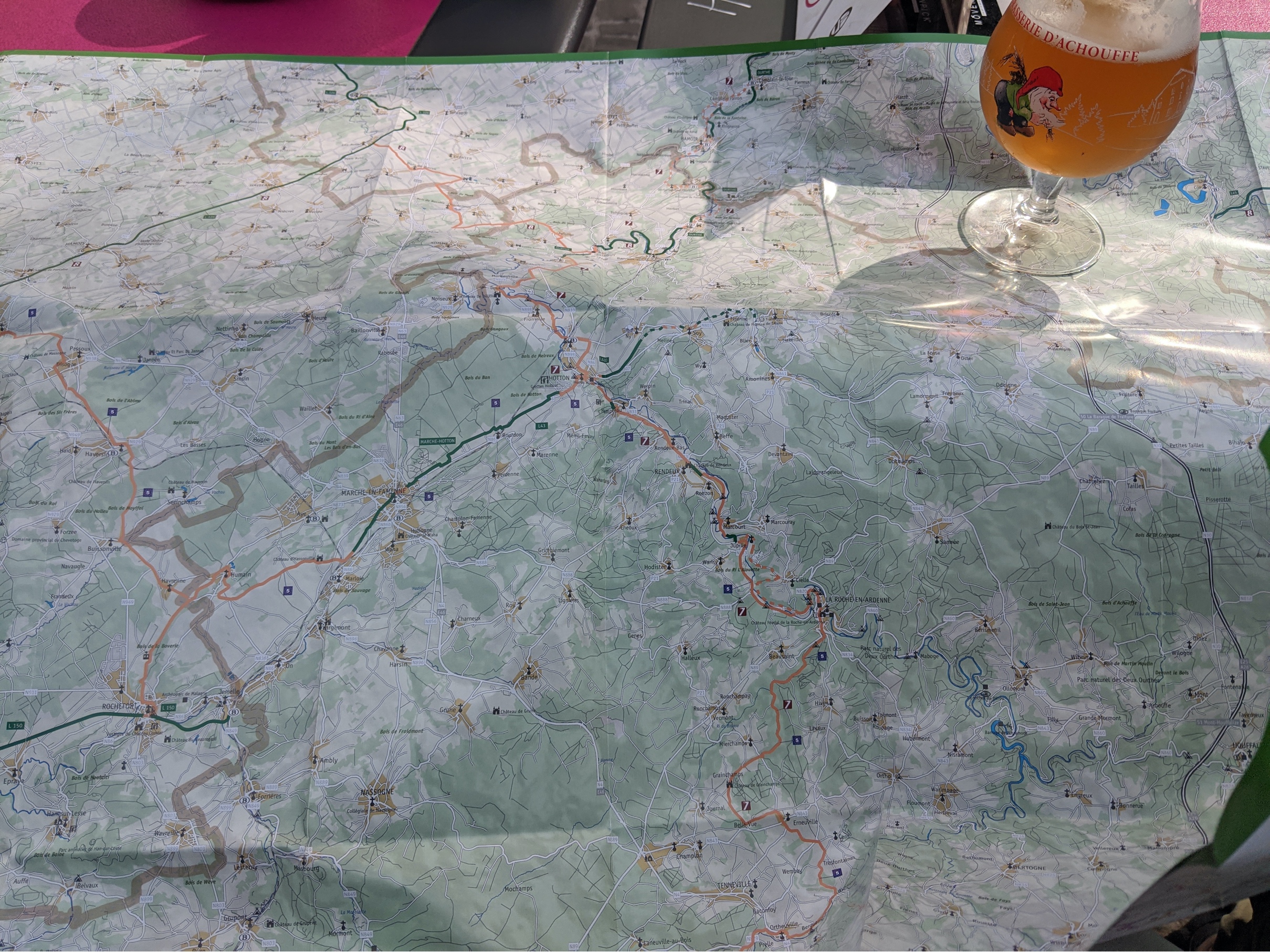 Logistics can be fun.

The trip was designed to be done in five to seven days, going to places the author found cool.

I would not be in La Roche-en-Ardenne had I followed my original plan, or even the plan I had at the start of the preceding day.

My costs were food, the (unfortunately) too frequent bike repairs, and camping spots. The stress from the first few days was caused by me feeling like my trip wasn’t following some prescribed route, and that I was failing because of that. Now that I had freed myself of that expectation, I started to relax.

An ex’s father, whom I liked immensely (actually I liked the whole family, including the girl), once said that timing is just as important in a relationship as anything else.

As I sat, drank, read, wrote, and reflected, I realized how this trip was exactly what my ex-girlfriend from two attempts ago wanted: learn some french, go biking/vacationing, and be adventurous (but not too adventurous).

We were together for five years, so something must have been working, but it fell apart. What if we met now? Would we be mature enough that the current “version” of ourselve would work? No idea.

It’s weird to sit in a cute french (belgian) town, eat the frites, visit the castle ruins, and feel super content. Then you look over for that person to share it with, and no one is there. 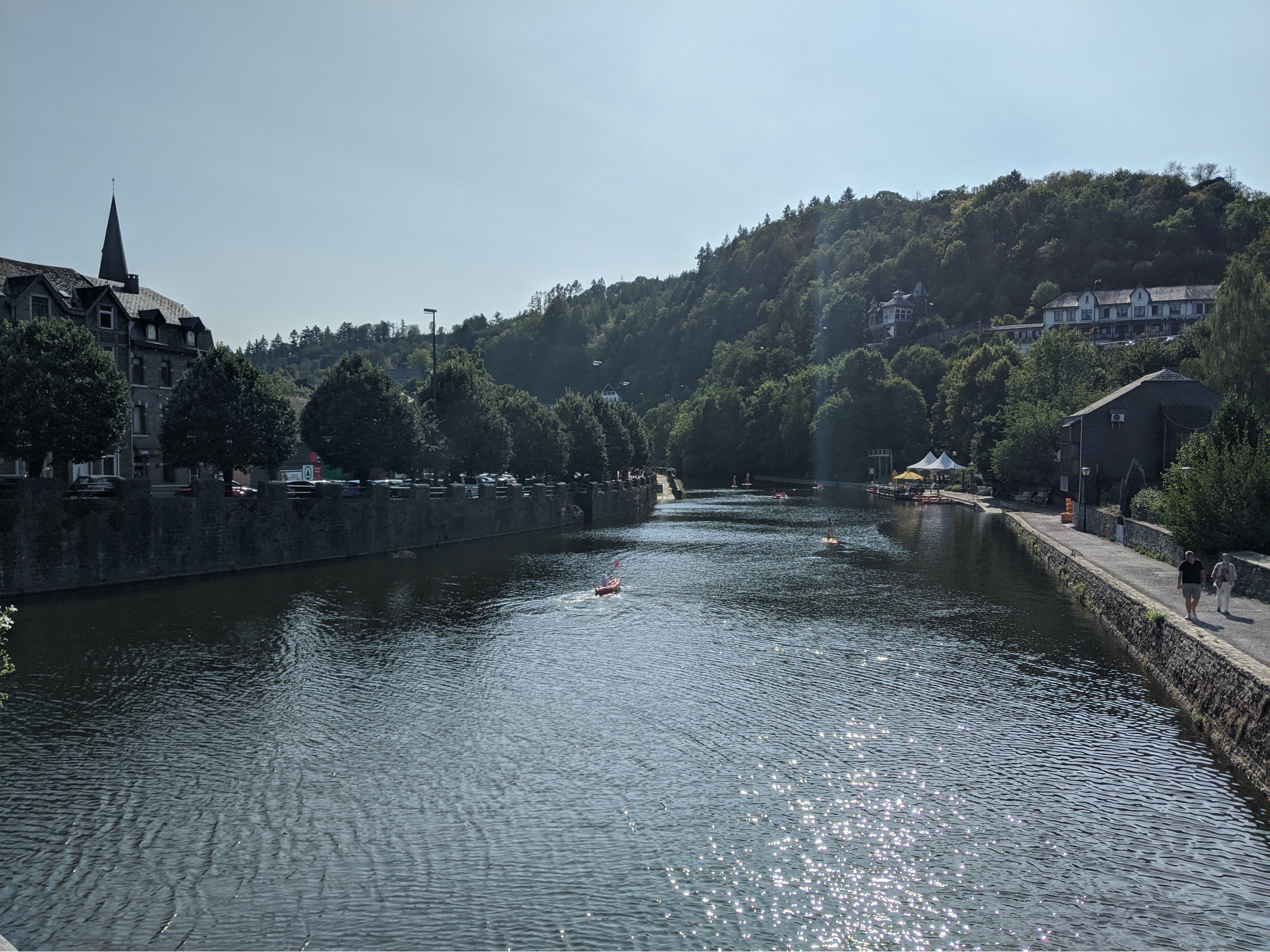 How can a fairytale town not be somebody's fucking thing?

It doesn’t diminish the moment, not really. When you remember the feeling of sharing a moment you know that what you have could be more, though.

Most of my “old” friends are married with kids or in some serious relationship. I never envisioned my life at X years old with a white picket fence, wife, and 2.3 children, but I guess I hadn’t ever figured on being totally unattached at 32 (strictly speaking – I seem to have accrued emotional baggage for days).

Gordon Lightfoot’s “Carefree Highway” has been stuck on repeat in my brain.

A bivouac sack, or bivy, is an alternative to a tent. Imagine wearing your tent around your sleeping bag like an ill-fitting condom. It’s uncomfortable, weird to get into and out of, and keeps the moisture on the inside separate from the moisture on the outside.

The bivy, which I opted for on this trip for cost and space reasons, does the job. I mostly sleep alright, and moisture outside stays there.

The inside is the problem. I wore too much the first two nights and got cold. I figured it was my sleeping bag, ignoring the fact that the inside of my bivy was a cold jungle of condensation each morning.

Sweat from over-dressed Stuart evaporates, passes through the sleeping bag, hits the impermeable and cold, outside-temperatured bivy sack, and condenses.

It’s sort of like one of the stillsuits from Dune. All your lost moisture collects and then re-settles on the sleeping bag. This immediately starts leeching all your heat. And, once it’s wet and cold, there’s nothing you can do until sun up.

The solution is to wear less. Even be a little cold when going to sleep. You’ll minimize moisture loss and stay warmer in the night. I moved to wearing shorts, socks, and a light t-shirt, and was much warmer.