“Jettison some weight, or I’ll never make it to Cybertron!”

Astrotrain couldn’t have been more right.

The day started well, despite a 9C night that woke me up cold. Tonight it will be cold again, but the nights get warmer after that. I’ll try stuffing extra clothing into my sleeping bag tonight to keep warm. Like a hobo.1

My plan for today was to head to Saint-Hubert. My exact route was unknown, but early in the day I passed a sign for the Lupulus brewery. It was too early to go, but I felt inspired, and searched for other breweries in the area. I found another about an hour away on the way to Saint-Hubert.

Happily, it was the Brasserie d’Achouffe. I have a rich history with this beer. Most of it good.

I head in that direction. My route follows mostly paved road, except for a small stretch 2/3 of the way to the brewery. It’s mostly gravel with some small rocks. I was worried given my previous experience, but the rocks were fairly small and I did my best to avoid them. I had also re-distributed some of the weight to the front of my bike.

Following the gravel section, which was at most 300 meters, there was a steep uphill incline to a small highway overpass. I rode over the bridge. One the other side I felt something was wrong with my back tire. I could even hear a hiss as the air escaped.

After the ordeal two days prior, then yesterday being perfect, it was crushing to have another flat tire. I was convinced it was the weight, and that I might not be able to even do the trip.

Despairing, I stopped my bike, took off my bags, and removed my back wheel. I took off the tire and removed the innertube. I inflated the tube with my pump (the one that doesn’t break the innertube), and immediately found a tiny pin hole in the rubber. I inspected the entire tube and was relieved to see it was just the single hole. I apply a glueless patch and prepare to weight 60 seconds for it to adhere.

In this moment, I felt my phone ring. The country code is +49, Germany. Not surprising. Before answering I knew who it was. Before I left for this trip I had a last round interview with a local company. Throughout the entire process, despite my continual request to use email, the recruiter insisted on calling me personally to inform me of the next steps in the process. The information provided on these phone calls never amounted to more than a 5-6 sentence email.

I answered the phone. Both my hands were covered in grease. In my right hand dangled the flaccid innertube. My left hand held the phone to my ear.

She told me about their job offer. She is going to send me an email containing the same information. I think I did a fairly poor job of feigning interest. I told her I would let her know next week, even though I had already decided to reject the offer.

After the phone call, I returned to the task at hand: crippling self-doubt. I didn’t know if I could even do this trip, if at any moment my overloaded back tire could go. I was essentially on perfect roads with a small gravel detour and found myself immediately with another flat.

I didn’t know if the patch would hold. I was 20min away from the brewery, and I couldn’t enjoy a moment of it. I could feel that my back tire had been bent. I also knew I had to shed some weight, and the U-lock I had for my bike was going to be the first thing to go.

I had a beer at the brewery. I was too pre-occupied to enjoy it. I scrapped my plans to go to Saint-Hubert. I find the next closest city with a bike shop: La Roche-en-Ardenne.2

Pedaling there, every noise from my bike worried me. I didn’t know if the patch would hold or if I would pop the tire elsewhere. 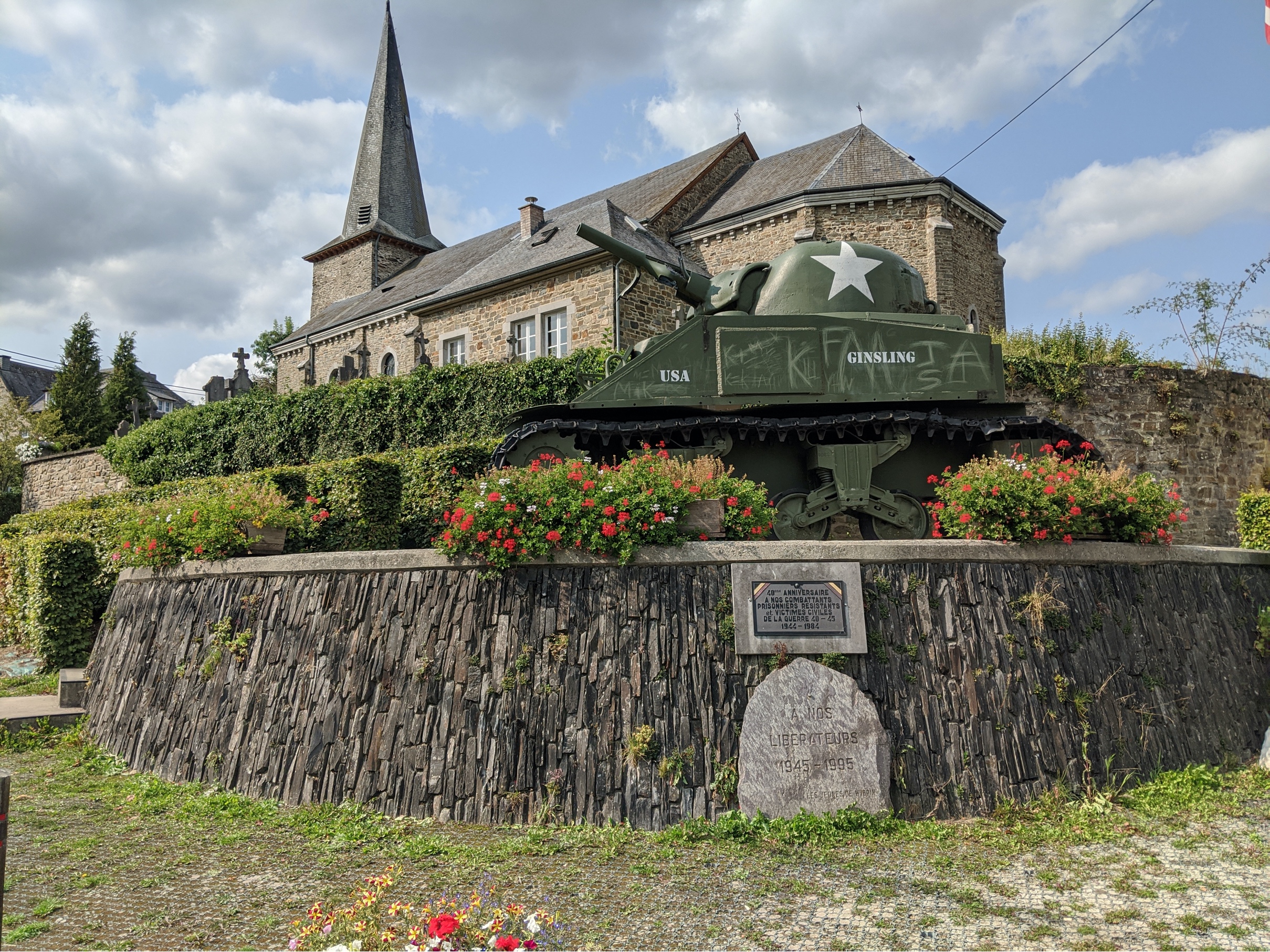 Another memorial at a critical moment for me. A nos liberateurs: for our liberators.

Unhappy, doubt-ridden, and tired, this memorial gave me some much needed perspective: I was riding a bicycle through a friendly country full of people who were happy to help me, I had food and water, and my bicycle mostly worked. I was going to be fine.

I arrived at the campsite and rented a space for the night. After dropping off my gear, I headed into town to go to the bike shop before it closed. The village is unbelievably charming. 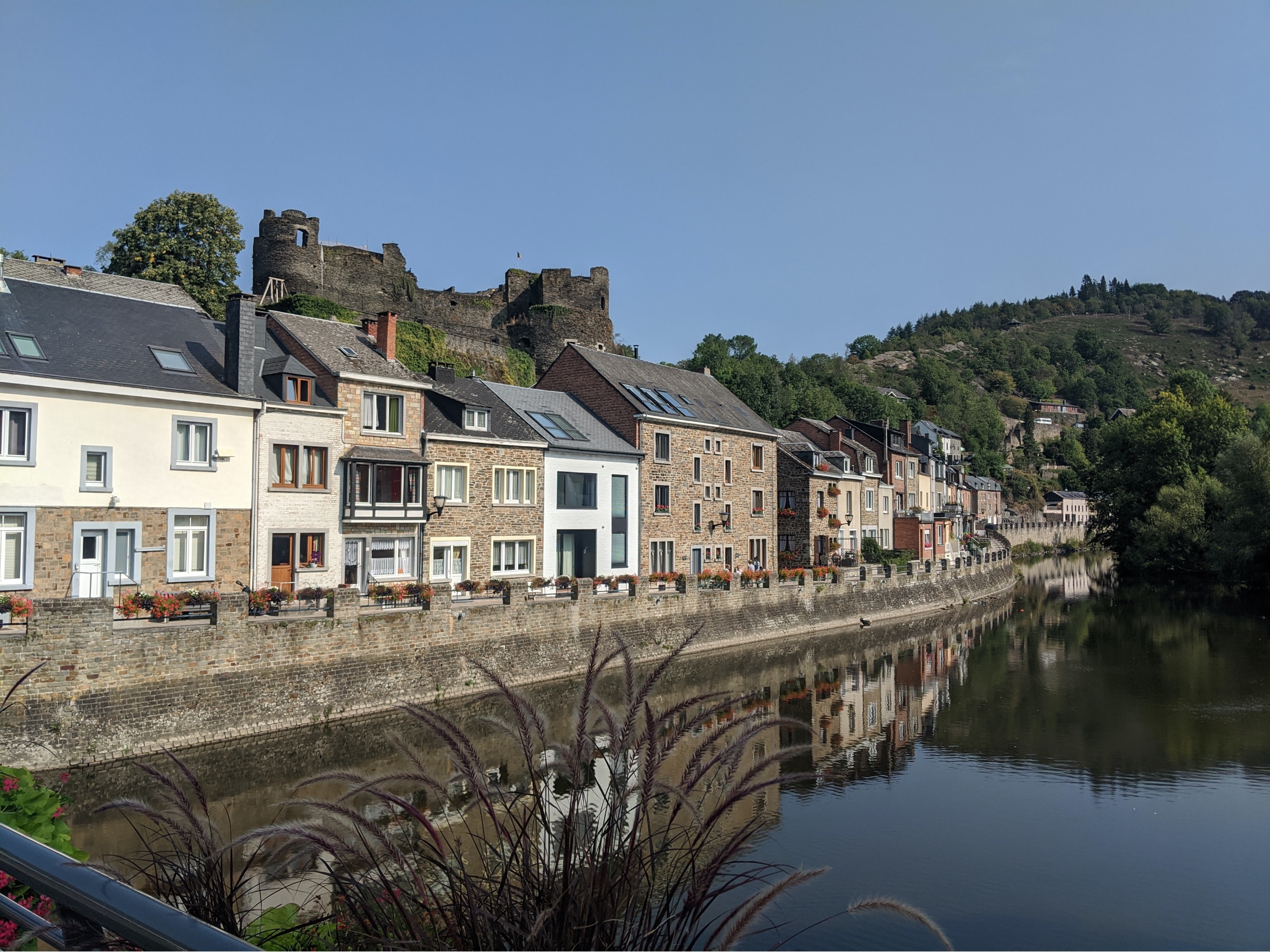 Within 2 minutes of entering the village I decided to stay there for at least one additional night.

Pushing my bike down brick streets, my mood immediately changed for the better. On long downhill sections I easily went 50kmph for minutes at a time. For those minutes I forgot everything and except the wind in my face and the trees speeding by.

The bike shop had a small line out the front. The two guys in front of me spoke Flemish, and the lady working the bikeshop sounded to be a native speaker. The area is french, so this was unexpected. It gave me hope that she spoke english.

When it’s my turn, I asked if she spoke english or german. She said german, to my relief.3 I asked for a chain lock because the one I had was too heavy. Then I told her I thought my rear tire was bent. She picked up the back end of my bike, spun the tire, and laughed at how absurdly crooked it was. 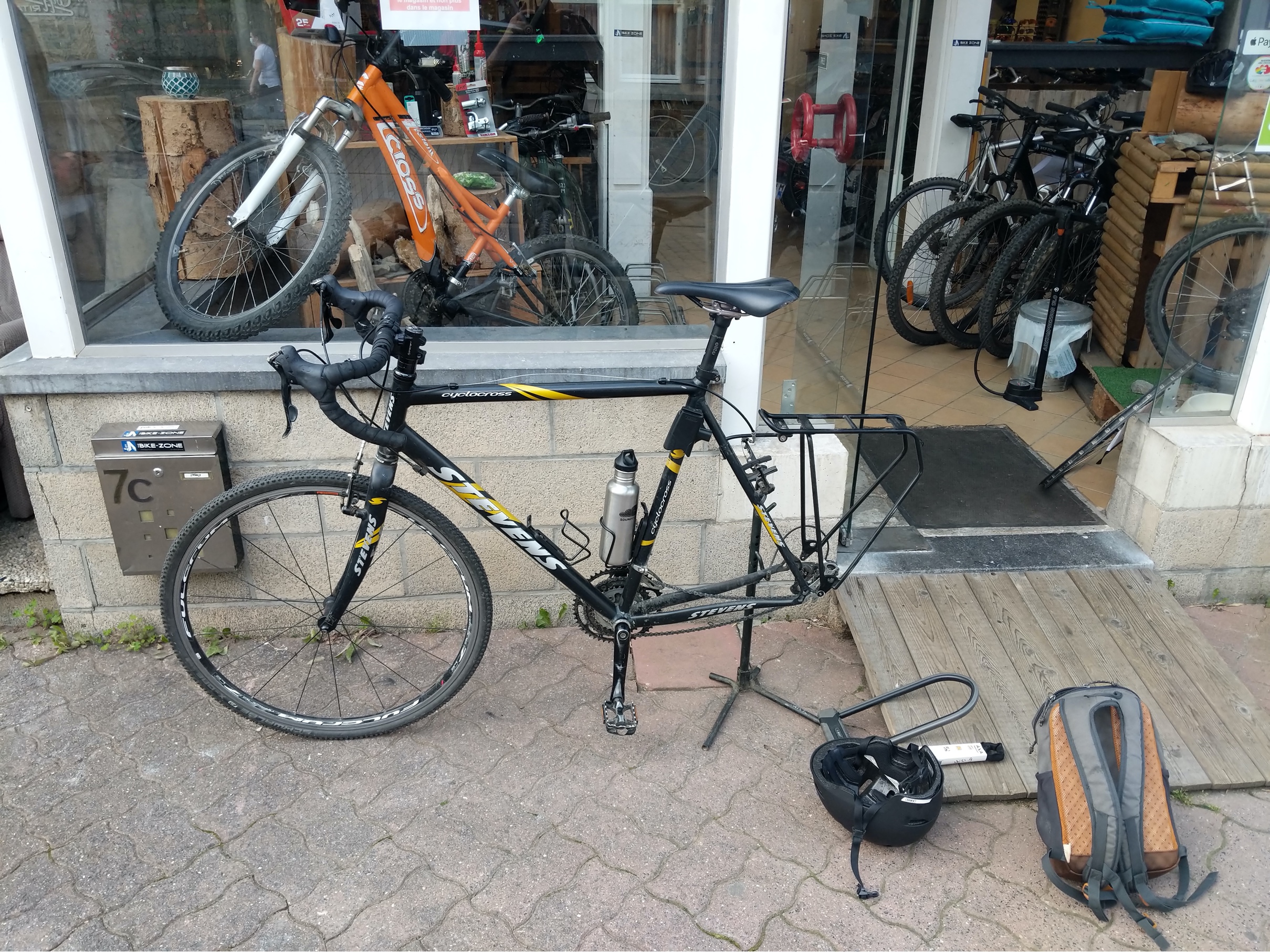 Steven the Dependable, while his rear tire was being straightened.

She grabbed the rear tire and took it in the shop to straighten it out. Coming back a few minutes later, she said it wasn’t perfect, but I told her it looked a lot better than it was. I gave her my huge U-lock as a gift, and assured her it was very reliable. She laughed.

I grabbed my accustomed dinner from the grocery store and pedaled back to my campsite. 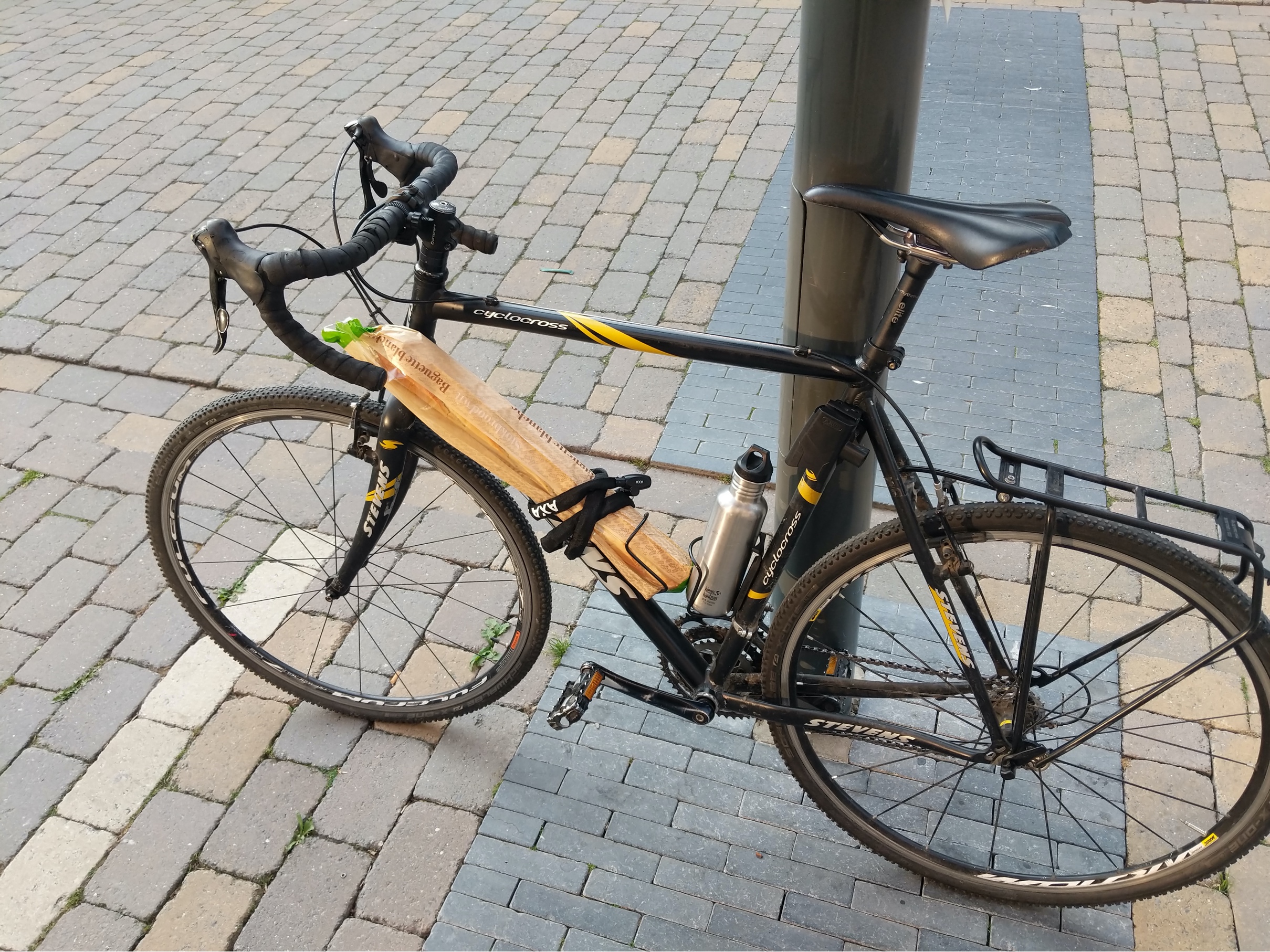 The new chain lock proved itself capable not only securing bikes, but also baguettes.

Having returned to camp, I showered, and settled down for dinner. Turns out I forgot my soap in the shower, which a guy camping nearby returned to me. We started to chat, and he invited me over to sit with him and his girlfriend.

They’re flemish. Flanders is the flat northern part of Belgium. Where we were, in Wallonia, it was very hilly. They came to the area to go hiking. With the leaves changing colors it was a great time to be there.

We talked about hiking, biking, my overloaded bike, and my new route plan (go to breweries and campsites).

The guy is Corneal (like Cornelius), and the girl is Joke (yo-kuh). He’s an arborist who takes care of public trees and lands. She used to be a diving instructor (“We don’t do anything adventurous anymore,” she complained after describing the 70km they hiked over the last three days).

Corneal comes from Bruges.
“What’s it like visiting other cities when you grew up in a picture-esque medieval town?"
“They’re all worse.”

They live in Ghent and are moving in together. Despite having bought a house, they still managed to fill it immediately with their stuff. Your belongings grow to fill their container, be it a house, suitcase, or bike bags.