Off to the Brewery

I originally had scheduled 90 km for today. Then, upon seeing the high temp for the day (32C), I scaled it back to 50km. I arrived in Jemelle feeling good. I even did another 15km rountrip to get beer from Saint Monon Brewery, but now I can feel the ride.

I followed the EV5 bike route the entire way, an international European route. Well marked, well maintained, it was good riding. After the first 10km I noticed my front tire was low. Nothing to be alarmed about, as I had redistributed my gear to put more weight over the front tire.

I pumped the tire up. Again, about 500m later, I noticed the tire was getting low again.

At this point, I’m pretty well versed in this dance: Take the tire off, take the innertube out, inflate the innertube to find the hole, patch the whole.

I pulled over to the side of the path and leaned my bike against the hill in someone’s front yard. The man living in the house came out to ask if I’m ok. I told him I just have a flat tire and I’ll be on my way again soon. He asked if I needed a pump, mimicking inflating a tire. I thanked him and told him I already had one. He went back inside.

I inflated the innertube but couldn’t find the hole. I didn’t put much effort into it, as I had two new ones from my last (mis)adventure. I squeezed all the air out of the old tube, folded it up, and exchanged it for the new one in my pack. I could find the hole and patch the other tube later.

At this point it was a non-issue to handle a flat. I had this realization after the fact, as I wrote this journal entry.

It was hot. When I was moving the breeze felt good, but I knew I was still losing a lot of water.

Some time later after putting my tire back on I noticed that my front brakes (right-side pad) were always in contact with my wheel rim slowing me down.

I could have tried to figure it out. I decided however to just unhook my front brakes. This was much better. I was rolling at a normal speed and had less than half my braking ability (the back brakes suck). What could possibly go wrong?

Bike shops are closed on Mondays in Belgium. I could get someone to look at it tomorrow.

There were several steep downhill sections arriving in Jemelle that I had to walk because I could not control my speed.

I arrived at the campsite dusty and thirsty. I finally understood how cowboys in movies feel riding into town and drink the water from the ladle, or just fall into a full water trough. It tastes really good.

I found the man running the campsite. The cost for one night was one euro. He said I could pay later. I unloaded my bike, unrolled my tarp, and set my things on the tarp. I would finish unpacking later. The campsite resembled a cross between an RV park, a junkyard, and a hobby farm.

I came to Jemelle because it had the closest campsite to Ambly, a nearby village where the Saint Monon Brewery was. Unintentionally, my original bikepacking route went through here and by Saint Monon.

Having unburdened myself I remounted my bike and headed off to the grocery store. My 3:30pm lunch consisted of a baguette, 200g of budget cheese, and a cup of cherry tomatoes. I seem to be averaging 1.5-2 baguettes a day. Refueled, I started the 9km ride to the brewery. The shortest way leaving from the grocery store was mostly long, hot, exposed climbs.

I rode by the worst smelling farm of my life. The front yard had a swing and kids toys strewn about. I wondered if they noticed the smell, or if everywhere else just smelled especially good. As I rode past the final pole barn it sounded like a pig was being either poorly slaughtered or expertly tortured.

The info on google maps and their website said the brewery taproom was only open on Saturdays. Full well aware of this (it was Monday), I set out anyway. In a past experience in Iceland, I learned that “closed” is usually just a suggestion when it comes to breweries.

It was 4pm when I left the grocery store. Peak heat, 32C, no clouds, and unnecessarily large hills. The streets and light made everything look french, but the heat lent the feel of a hard baked Italian town in late summer.

I was in an uncharacteristically good mood. The temperature was absolutely manageable (it would have been horrible to walk), I had eaten, I had water. Going downhill there was a breeze.

I arrived in Ambly about 45min after leaving the grocery store and pedaled over to the brewery. Unsurprisingly, it was closed. There was a large area around back, presumably for trucks to drive into for loading beer. I walked back there and found an employee.

He showed me some of the bottling equipment and led me into the taproom, where he talked me through a few of their beers. I grab a blanche (white), ambrée (amber), and brune (brown). 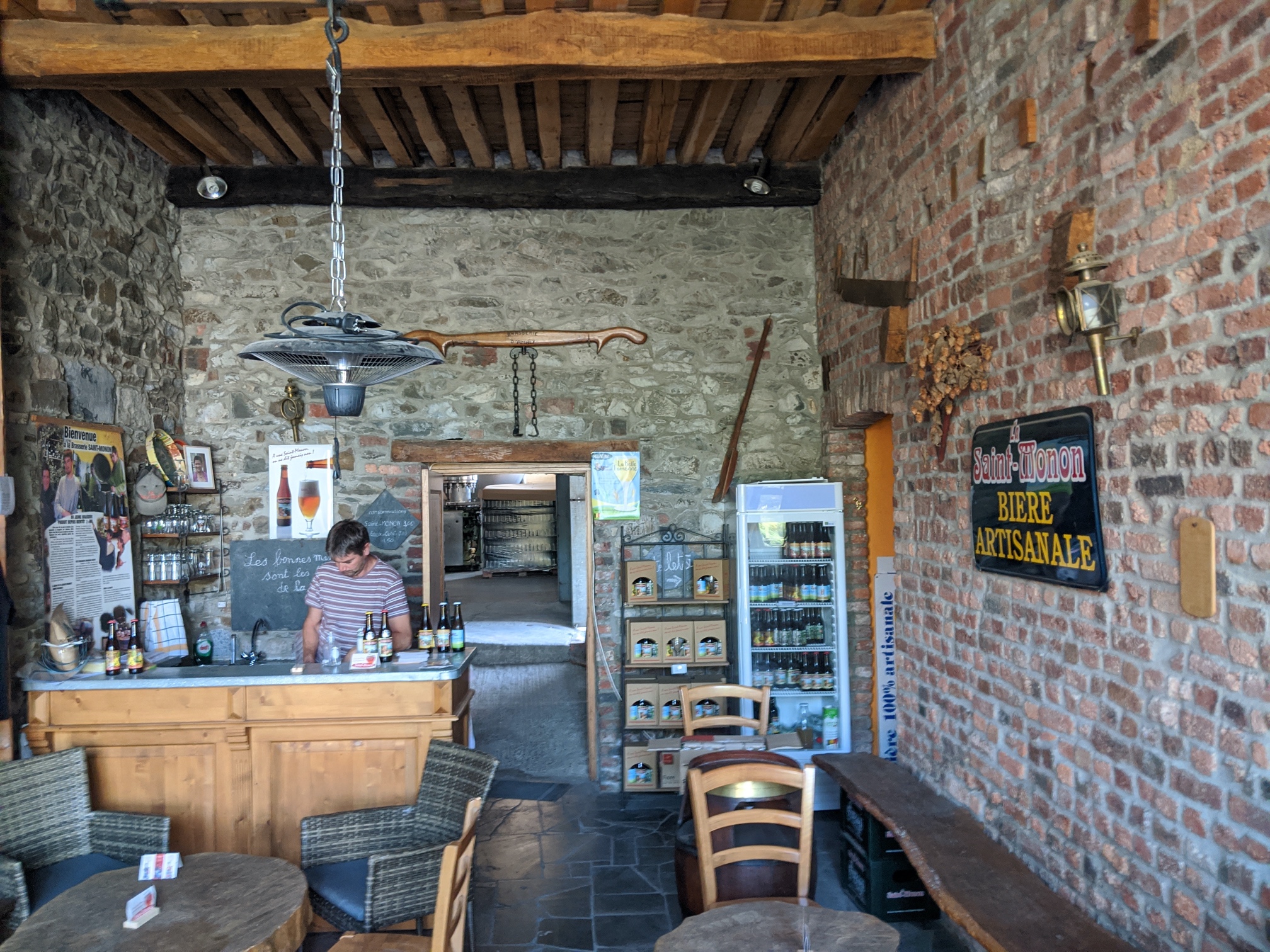 The very cute Saint Monon taproom. I would have gladly stayed for a beer.

Mission accomplie. The main pointed at his watch and said he had to get back to work. I thanked the man and headed out the front of the taproom. 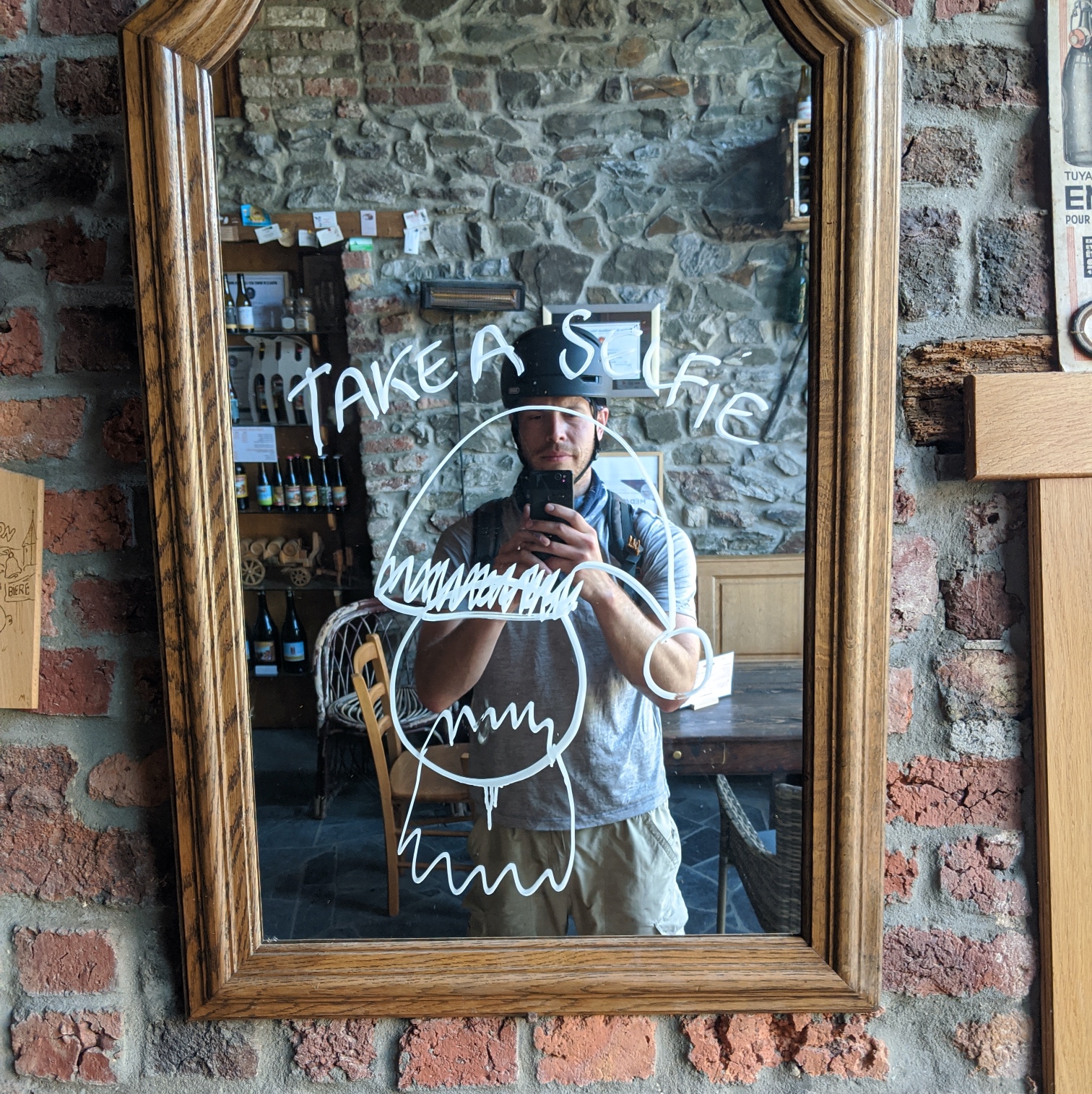 The mirror compelled me to.

I stood out front and drank the blanche. It wasn’t strong, and tasted great after having cycled.

The route back to Jemelle was longer but flatter. It wound around the hills I had gone over on the ride there. There was a fantastic cool long downhill through the forest. The thought occurred to me that these forests probably hadn’t changed in hundreds of years.

I sat in Jemelle on a bench across from the church and drank the amber.

The night was going to be warm, only 16C at the lowest. I had hopes of finally not waking up cold in the middle of the night. On the plus side, a morning after a cold night means any left over beer is already chilled for breakfast.