Not so much wanderlust as much as fernweh, despite being away from “home”. When I left the house last night for dinner, my hostess was watching tv on the couch. Maybe it’s the fact that I’m simply in a home that’s bothering me. Which is a weird thing to contemplate.

I walked to the bastogne war museum. I thought it was about the battle of the bulge, but it covered the run up to WW2, starting with the end of WW1, and all the way through to the war’s end. 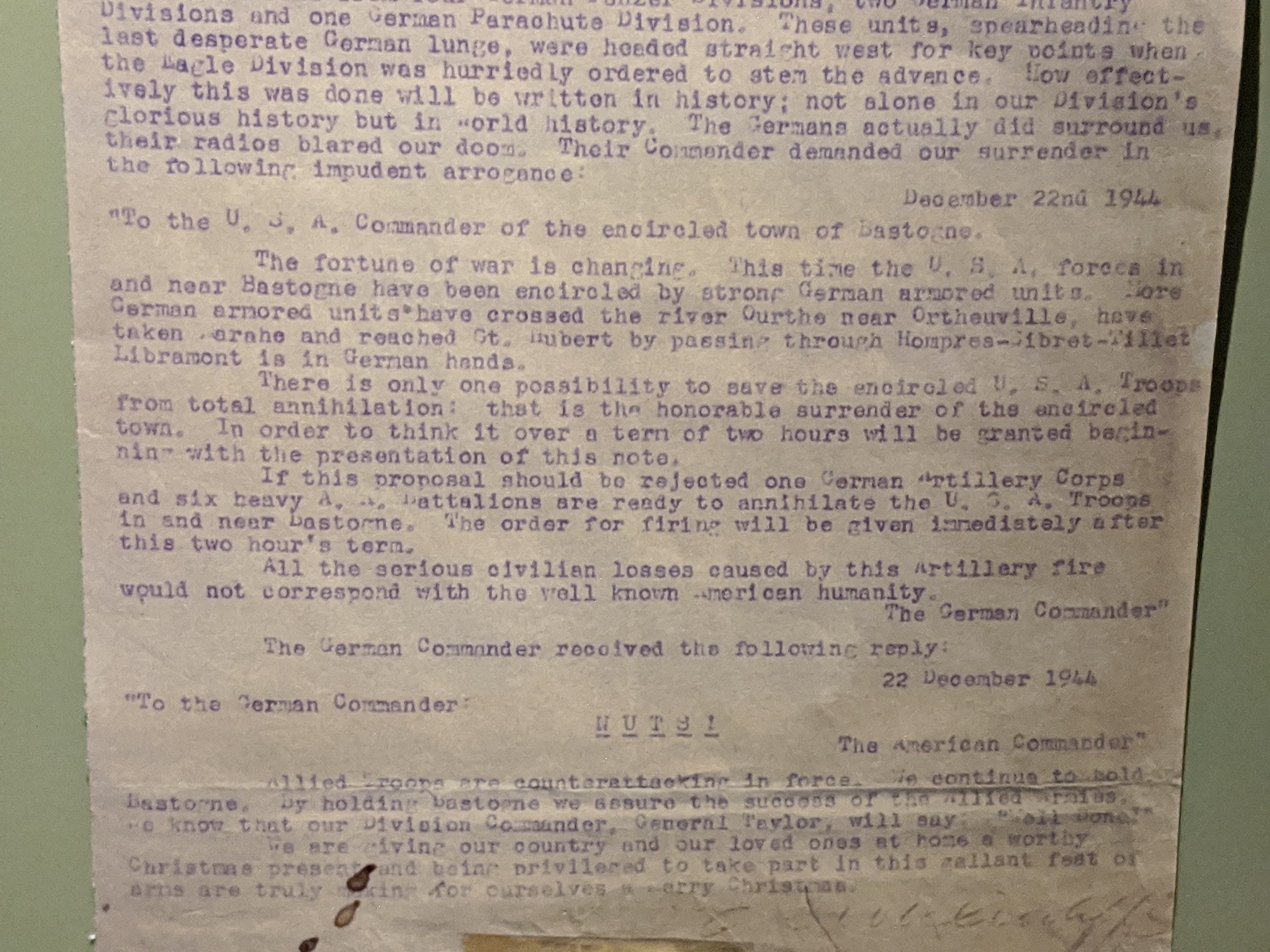 Having surrounded the americans in bastogne, the germans requested their surrender. The american commander's response, "NUTS!", made little sense to the germans, until american artillary bombardment recommenced.

It was engaging and informative without being exhausting. You follow the story of four people through the war – a nazi soldier, an american soldier, a belgian boy (~13 years old) and a belgian woman (~25 years old).

Their stories all intersect, and the narrative is well resolved at the end. This was not the best museum I’ve been to (that honor remains with the Polin Jewish History museum in Warsaw), but it was still a very good museum.

Frank, my ride back to berlin, messaged me to say the covid numbers out of the netherlands, our proposed route back, look bad. If germany puts a quarantine requirement on travelers returning from there he won’t come. This would be unfortunate. Not only would I have a very long way home (there are no nearby german cities with good connections to take me back), but I am also waiting here several days specifically for him. Hopefully he can come.

Before I left, working on generating reports for bräugier’s sales, I was having a great time. Owning a product soup to nuts, providing value, and remembering some programming were all fun. Even if it was for something as dry sounding as “generate sales reports”.

Out here, with books and a bicycle, I find myself bored. I’ve done my camping, cycled long distances, improvised a route, and even proved that I can speak enough french to handle myself (enough; not a lot).

I’ve hit the limit of simple conquests on this trip.

There are harder problems I can address. Reflecting, writing, things that show no progress as you scratch your neckbeard until maybe you arrive at an answer. These problems can be felt, but getting at their source isn’t clear cut (cf. my unease at staying in a home), nor is their solution.

Am I happy so long as someone dangles a carrot on a stick ni front of my face? Enough people, myself included, have noticed how I’m interested in solving the problem, but lose interest when I get to the seemingly mundane implementation of the solution. That is what feels to me like a grind.

Maybe short projects with early-stage startups, like what I did with bräugier, or with Etienne’s freelancing, would be good for me. I think though that a key part is my relationship with the client. I was happy coding for the brewery because I knew I was doing something valuable for friends. Unfortunately, the majority of my friends aren’t working at early-stage startups.

Just heard from Frank. Turns out I have to get back on my own.