Today I was going to stay in the area and go for a hike. The river was flanked by fantastically forested hills, the sky was clear, and the temperature peaked at 24C (sweet, sweet respite).

The original path I looked at turned out to be for mountain bikes. And, at 20km, it was more than I wanted to hike on a day off.

Marine, a friend originally from this area, sent me a page of suggested hikes. I found one that looked good (moderate difficulty, 14km), and saw I had to bike a bit to get there: take the voie verte to Monthermé, jump on a different bike path to Tournavaux, and then hike.

I didn’t check the distance to the start of the hike. Since I had no pack and the voie verte is an easy cycle, I figured it didn’t matter.

It ended up being 25km to the trailhead. Not bad, to be honest. It probably took a hair under an hour to get there. 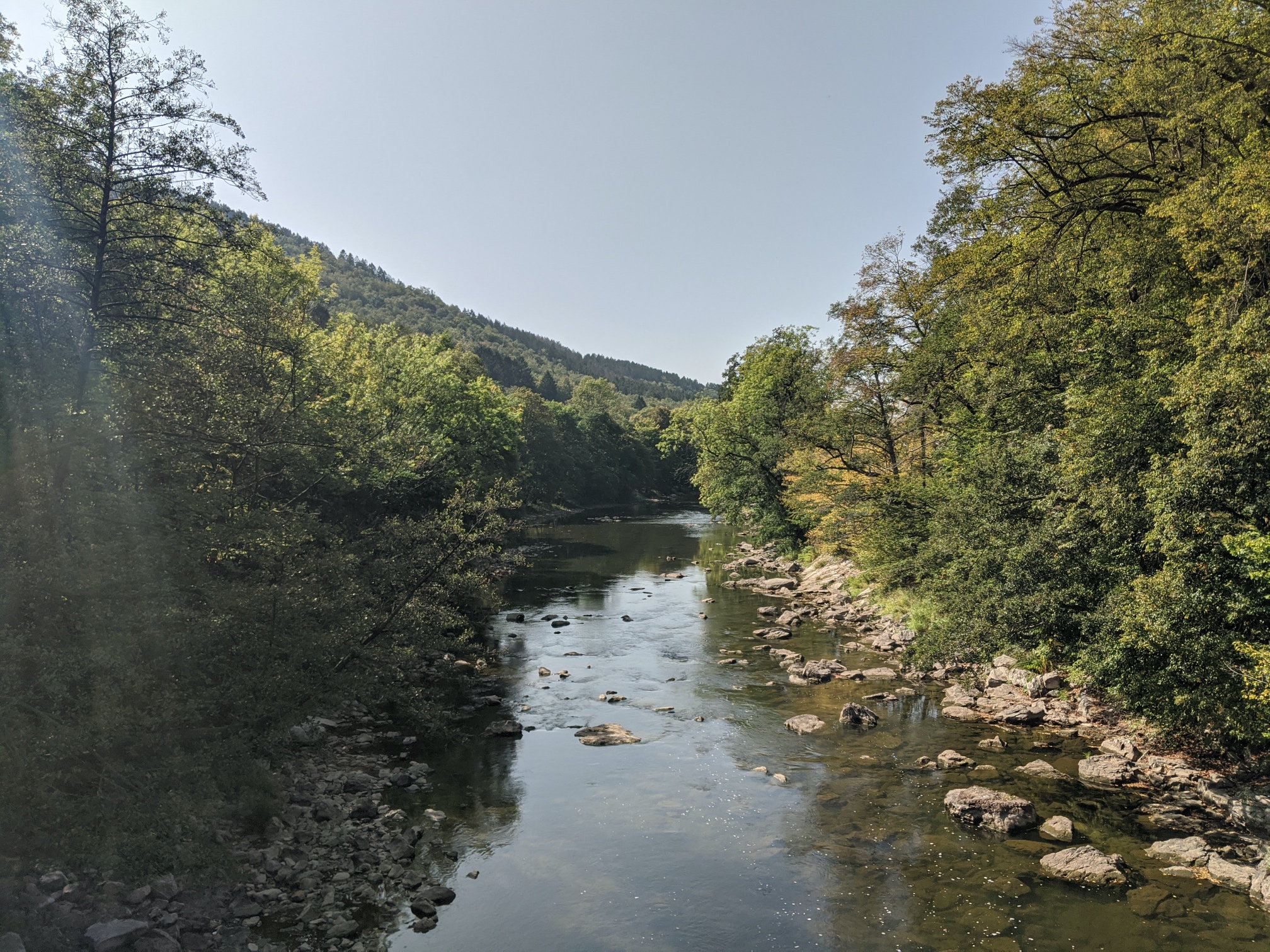 River I crossed over on my way to the trailhead.

The hike ended up being fairly unremarkable. The hike was on well-trod dirt paths through nicely shaded forest. There were some ups and downs but it was never great. At the “famous” point of the hike, Roc la Tour, there were two groups of two. One was a couple in their mid-20s, and the other two guys in their late 40s or early 50s.

The couple were speaking english, so I started chatting with them. The guy was flemish and the girl was costa rican. I mentioned I was from minnesota, and the girl immediately responded “oh minnesooooota, dontcha know?”

Turned out a client of hers is minnesotan, so she apparently was already acquainted with my people and our customs.

One of the older guys joined in the conversation. He’s flemish, speaks good english, lives near Bouillon in Wallonia. Both I and the couple mentioned we were going to pass by that way, and he tells us to visit le tombeau du géant – the giant’s tomb. I have no idea what is there, but I made a note to visit it.

The couple excused themselves and continued their hike. I sat sat down to keep talking with Bert (“Like Bert and Ernie”) and his friend, whose name I’ve forgotten (not Ernie).

Bert was a bit of an americanophile.1 When he was in his early 20s (so about 25 years ago, mid 90s?) he went to Seattle. While he was there he met/befriended/found a native american with no money, a growing pile of bills, and a 62 coupe de ville2 for sale, for $1000. Bert figured, well, if it only made it 500 miles, it wouldn’t bankrupt him.

He zig-zagged across the entire USA in that car (“I think I got about 300km per 100L of gasoline."3). Apparently people would just invite him to stay in their homes, disarming young belgian that he was. He told me to make sure to go to Bastogne and see the museums for the battle of the bulge (I have planned spending 3-4 days there at the end of the trip when several days of rain move in). He mentioned having read extensively about the american civil war. Without testing his knowledge, he easily knows more than me about it.

We talked a bit about belgium. I regurgitated facts I learned yesterday from Ward; things I remembered from visiting Vanessa in Brussels.

After talking for about 45min he said if I pass by his place I could crash in his spare room. While I was a bit wary of this invitation, I think he meant well and was just trying to repair the (alleged) favors of americans 25 years past.4

“That trip changed me. I’ve never felt such liberty. No schedule, no obligations. It’s harder than you think to go back to structure and a 9-5 job.”

I can’t remember exactly the quote he told me from a travel guide, but it was something like “Watch the best moments of your life speed by in the rear-view mirror.” 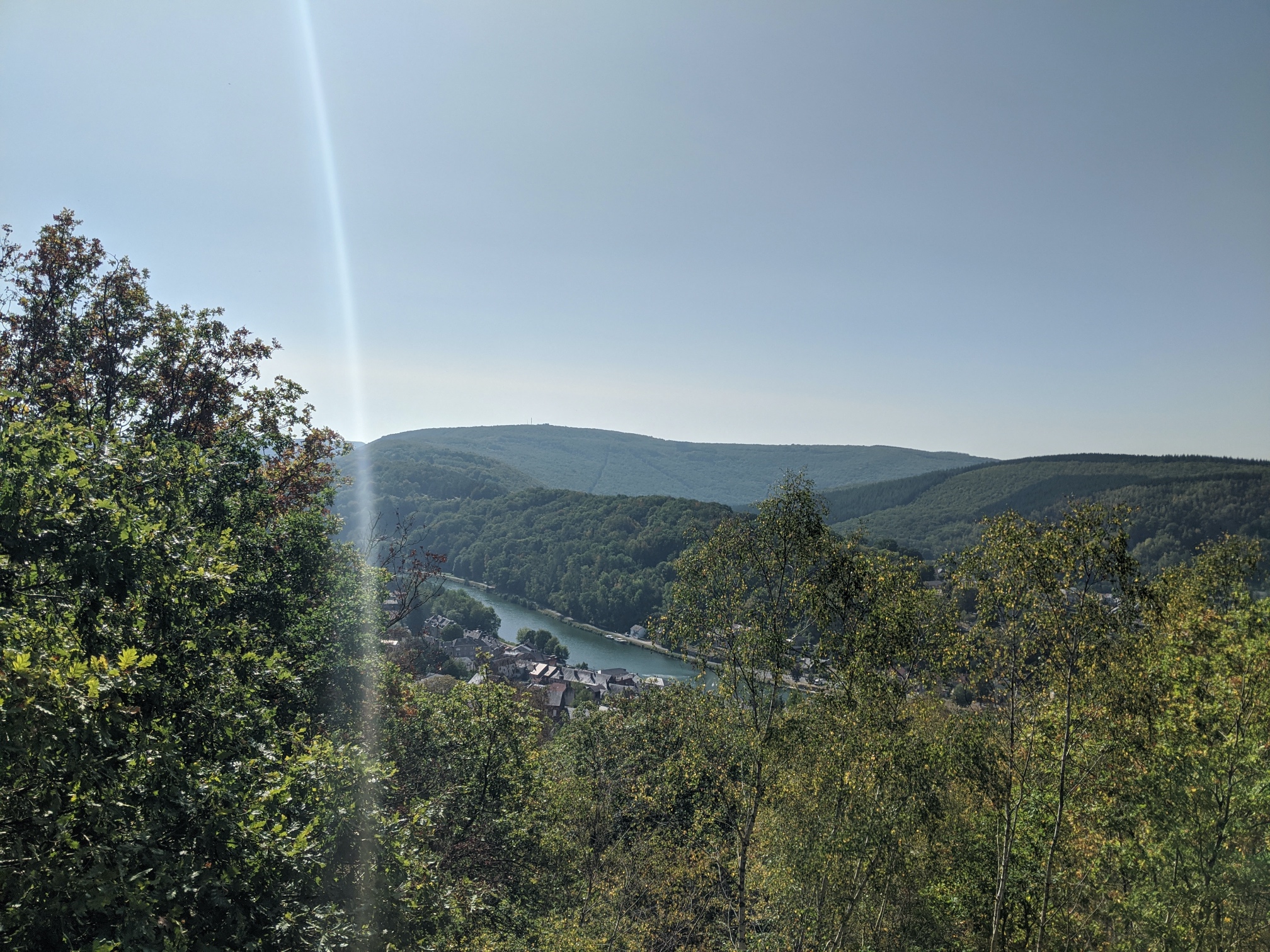