It rained several times in the night. Despite my inability as an outdoorsman, my tarp kept me dry. Except for waking up cold between 5am and 7am (cf. previous comment on bivouac sacks), I slept well.

I broke camp around 9:30am. I had only drunk two of the three beers from the previous night, so I had a Leffe with breakfast. Breakfast was a bit of peanut butter with some dried cranberries.

Given the successes of my previous day, I decided to follow national bike routes today. Belgium is criss-crossed by bike routes both national and international, which are paved, well marked, and never take you far from campsites or places with food and water. Essentially, by day 3, I had abandoned the original route that brought me here and started free styling my own route based on an arbitrary destination.

I had calibrated my time/distance estimation based on the preceding two days. Riding the national routes was completely different. It was not difficult to ride 25km in an hour, for example, which saw me passing by potential lunch points two hours before I was hungry.

I reached Malmedy at 11:30am and bought a quiche and pain au chocolat. I sat by the cathedral and had my early lunch, and was starting to feel better about the new direction of my trip. I was not confident in being able to handle the original route, and picking each morning where I wanted to be in the evening left the trip became a really fun way to travel. In the evening I would sip a beer, look at my map, and choose my next destination. 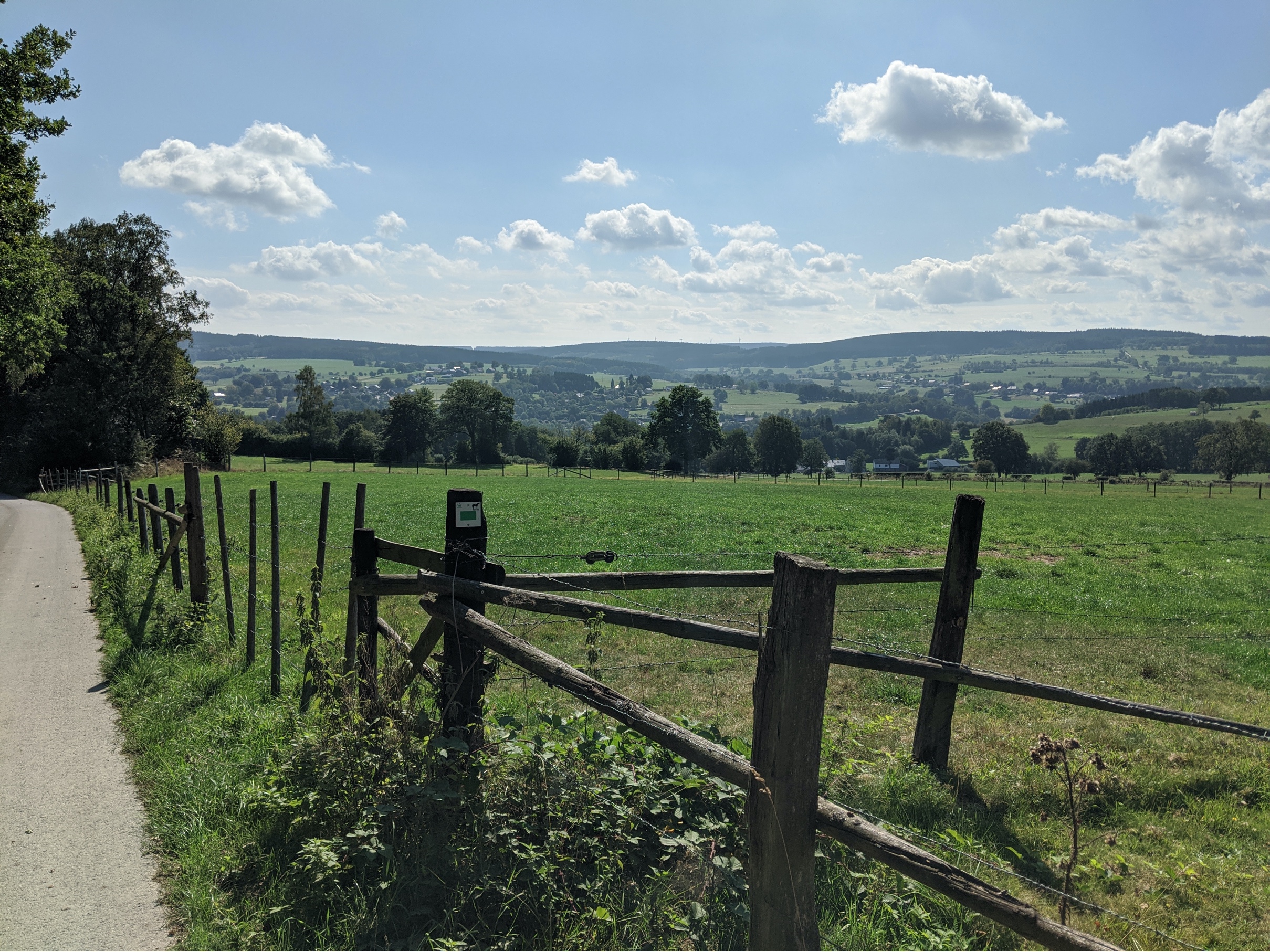 The paths I took were empty. Hour long stretches drifted by without seeing another person. I passed through empty villages with monuments to fallen soldiers. I would learn much about the fighting that occurred in this region. 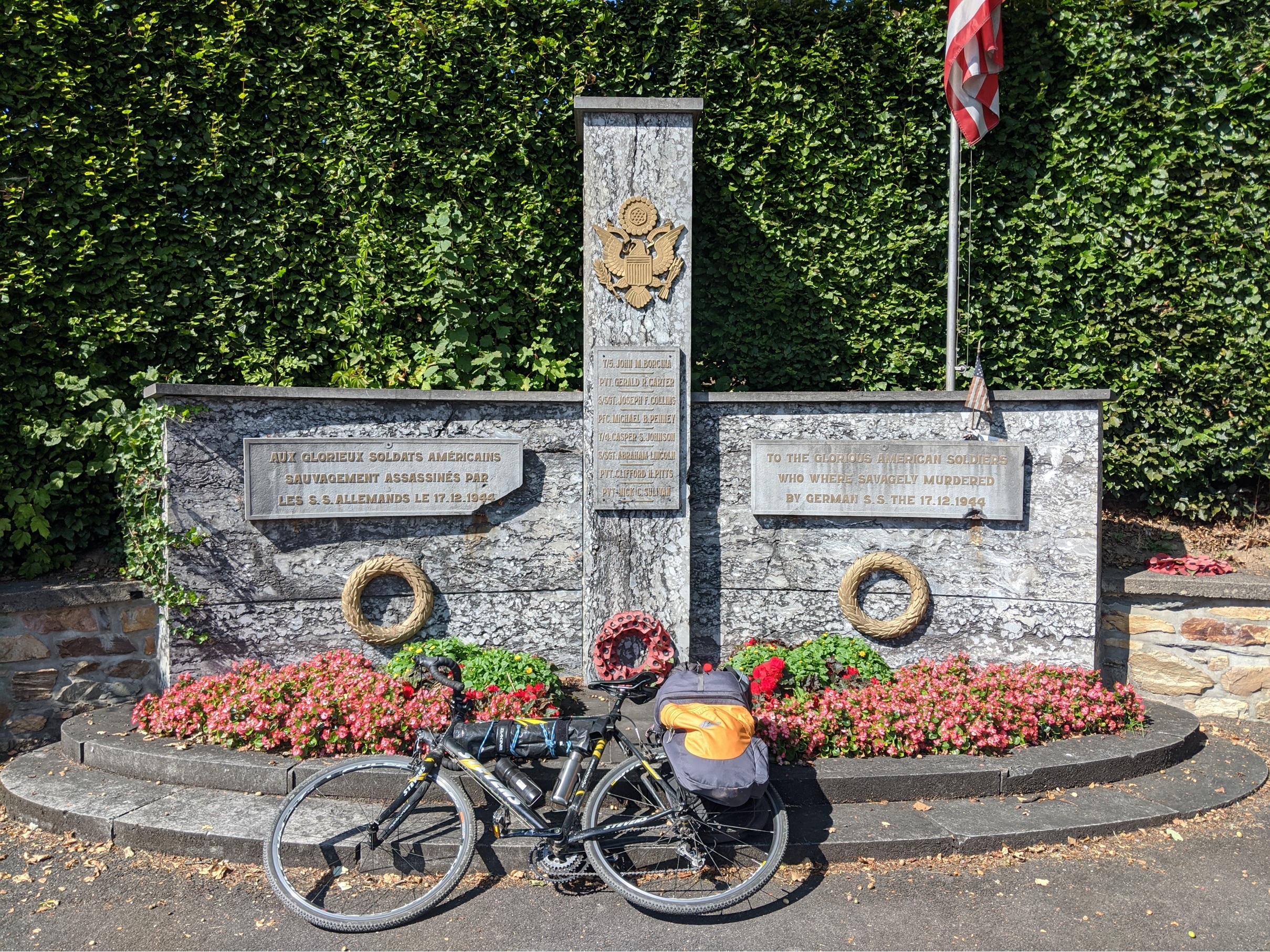 This was one of many memorials I saw. I paused the longest at this one.

I saw memorials for Americans, for Belgians, for the English, for the Scottish. Some died fighting, some as prisoners, some in concentration camps. I stopped at most for a moment to read the names. They made the war seem real in a way that I never experienced in the USA.

Belgium has a German speaking minority. Cycling through the German-speaking Recht, stopping at the memorial there, I wondered how they had felt. The village is 20km from the German border. 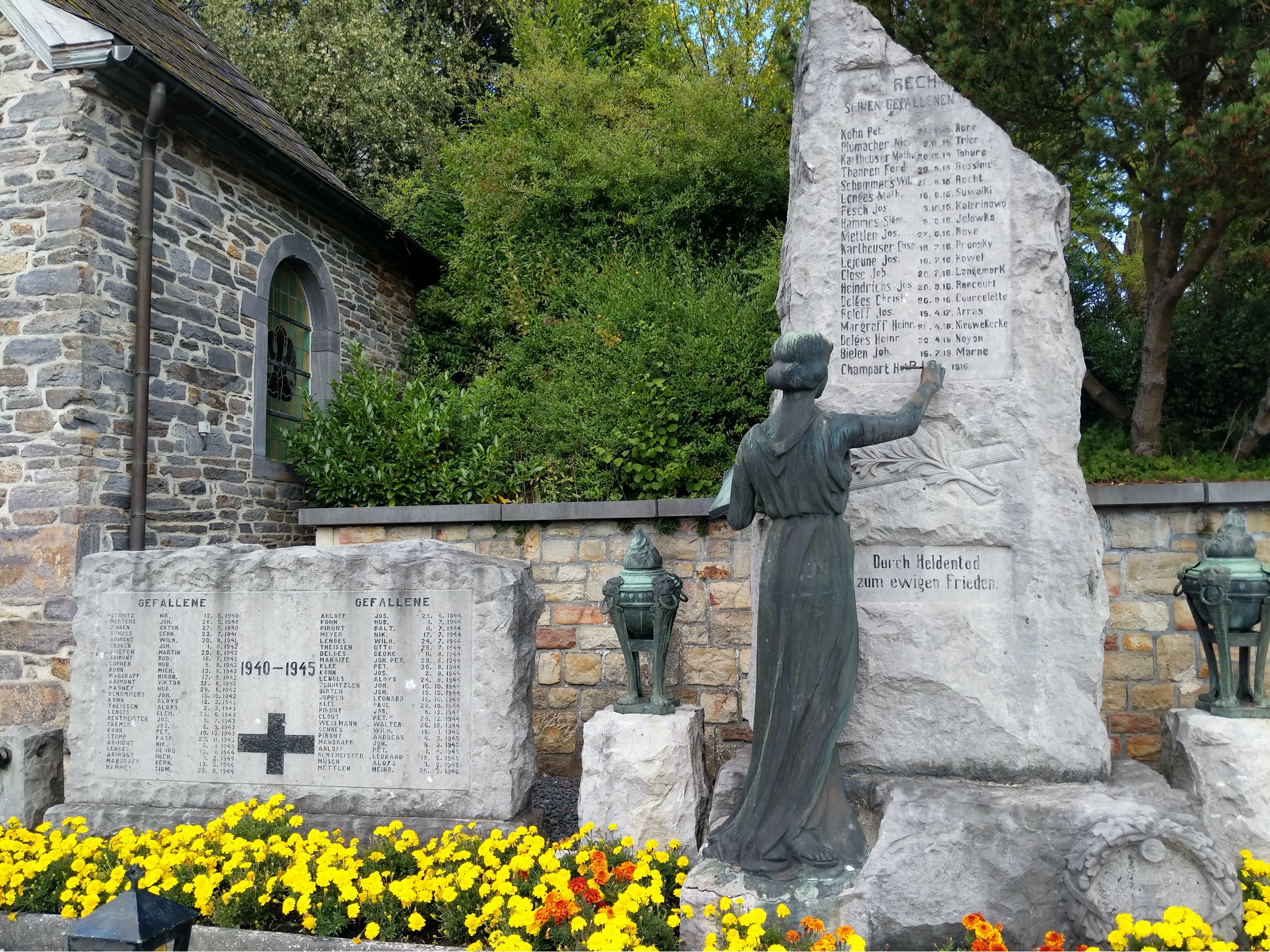 My destination for the evening was Viersalm, and a campsite there. The campsite cost an outrageous 8 euros, but I supposed I could afford it. I dropped off my gear, unrolled my tarp and bivouac sack so they could dry, and headed into the town.

On a beautiful day I was rewarded with an excellent terrace overlooking a lake. 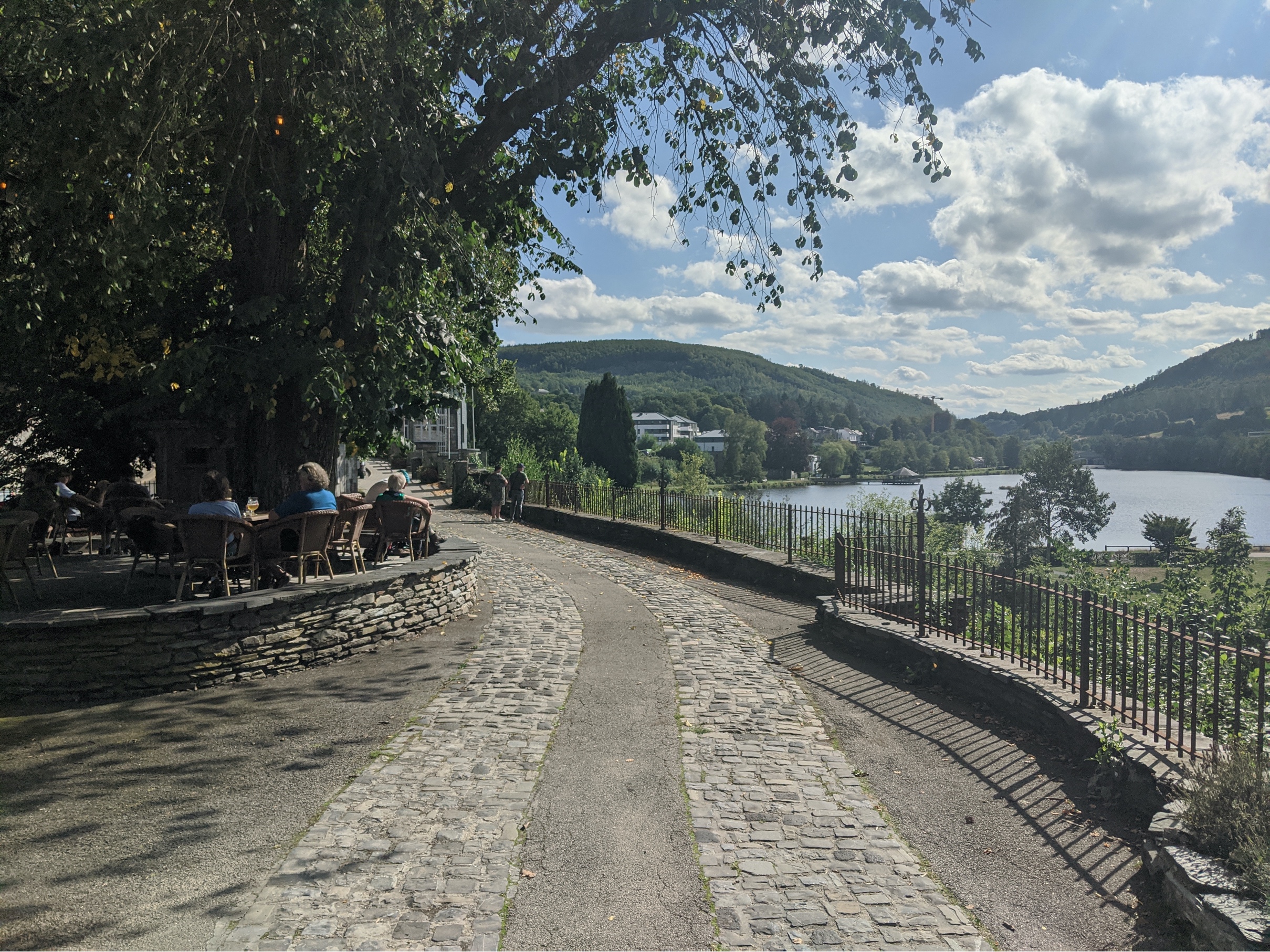 After the previous day, I needed this very much.

The beer list contained many local beers I had never heard of. Looking around, the most popular beer appeared to come in a glass horn. Naturally, I had to have one. 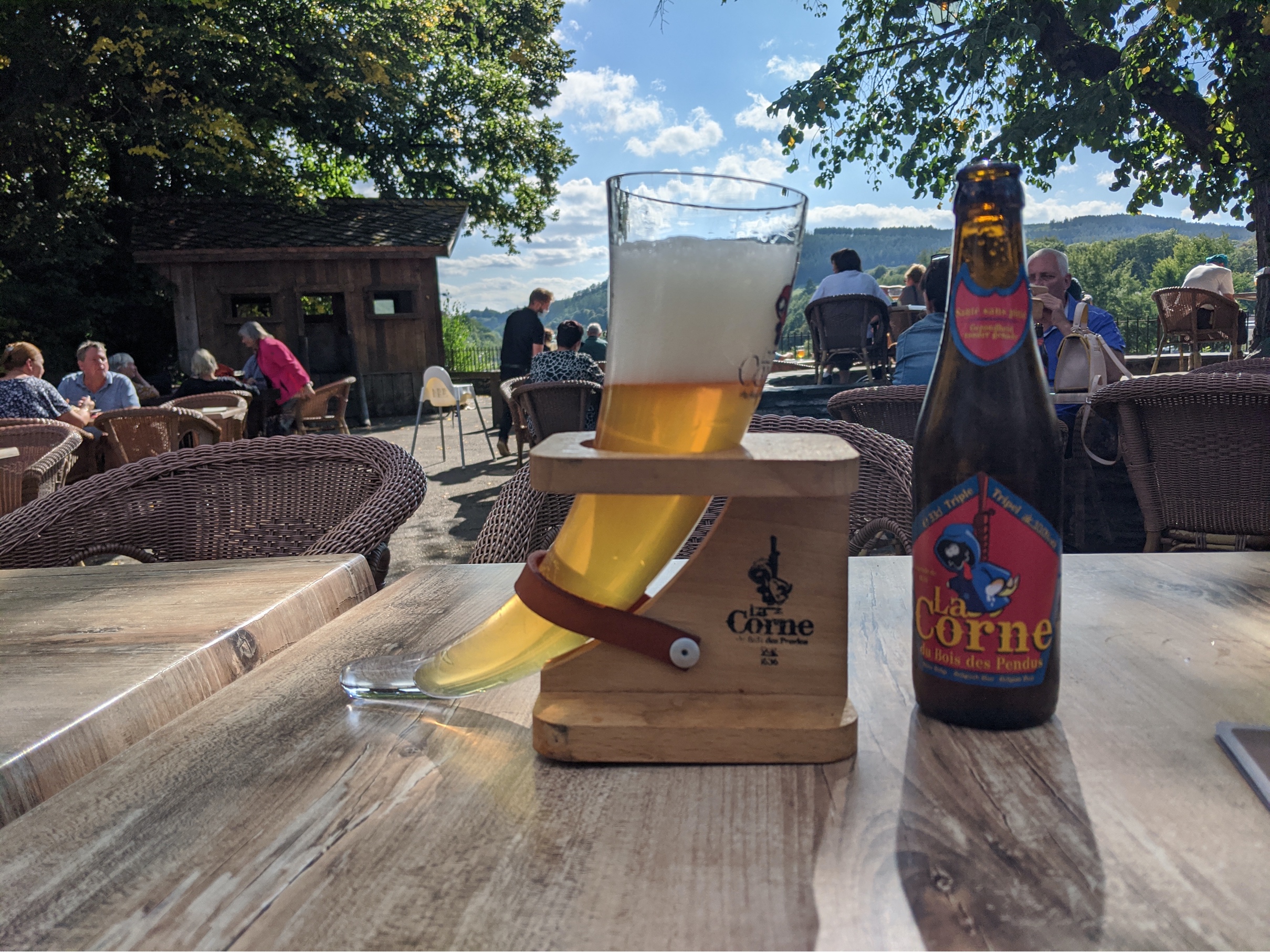 This was a strong beer. The drinker would pick up the entire stand to take a sip.

Beating a wobbly retreat, I passed through the grocery store for dinner. Meal in tow, I returned to my campsite to shower, eat, and sleep. 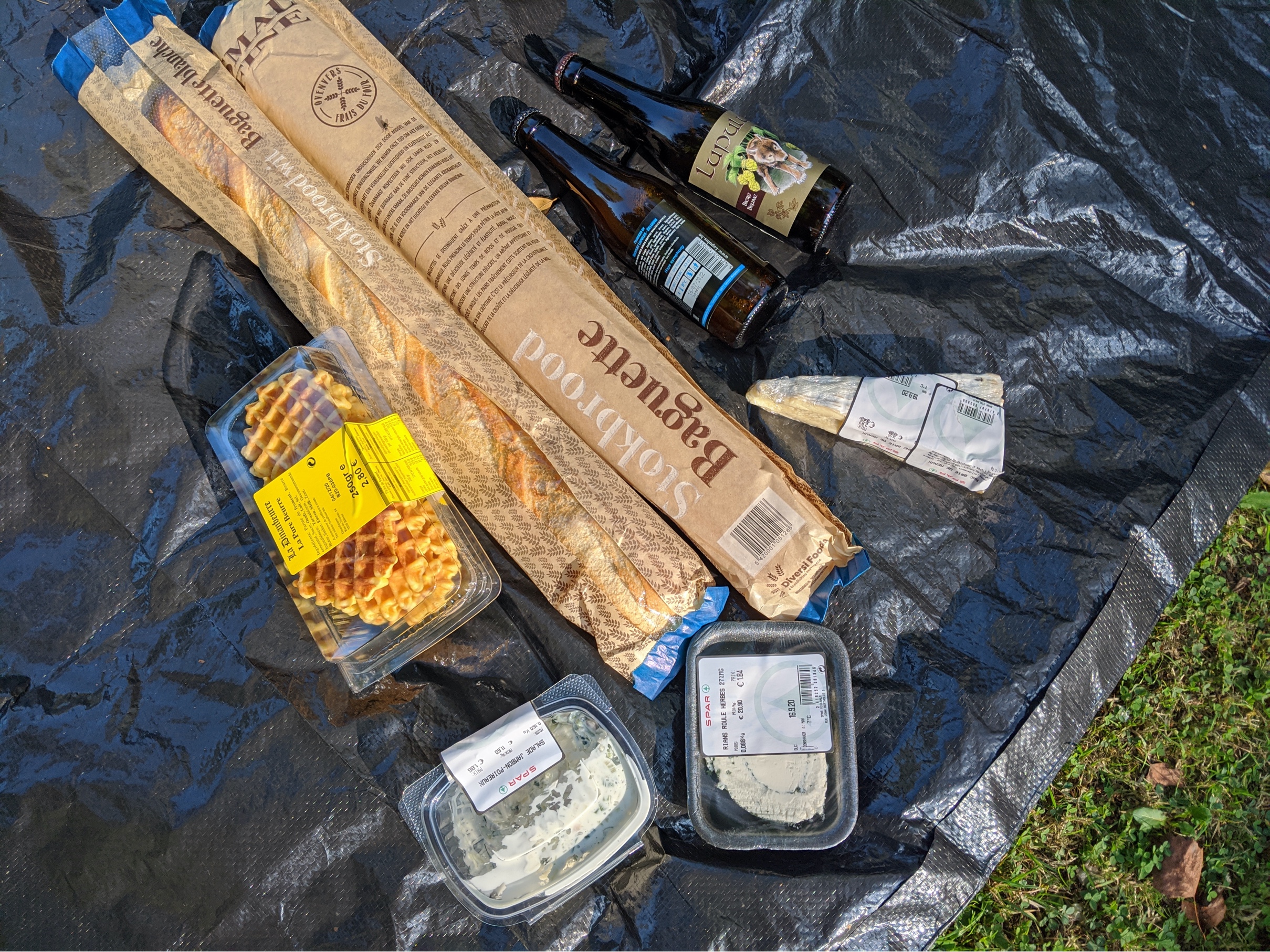 This meal would become a common sight.

Noticing the piles of food wrappers and empty bottles outside the nearby tents, I realized that keeping food away from animals was not a concern.