I got up and packed. My breakfast was 3 belgian waffles and the remaining brown beer from Saint Monon. They went together really well. I tried to find the guy running the junkyard/campsite, but he was nowhere to be found. I’m now probably wanted in the area for not paying the one euro for the campsite. 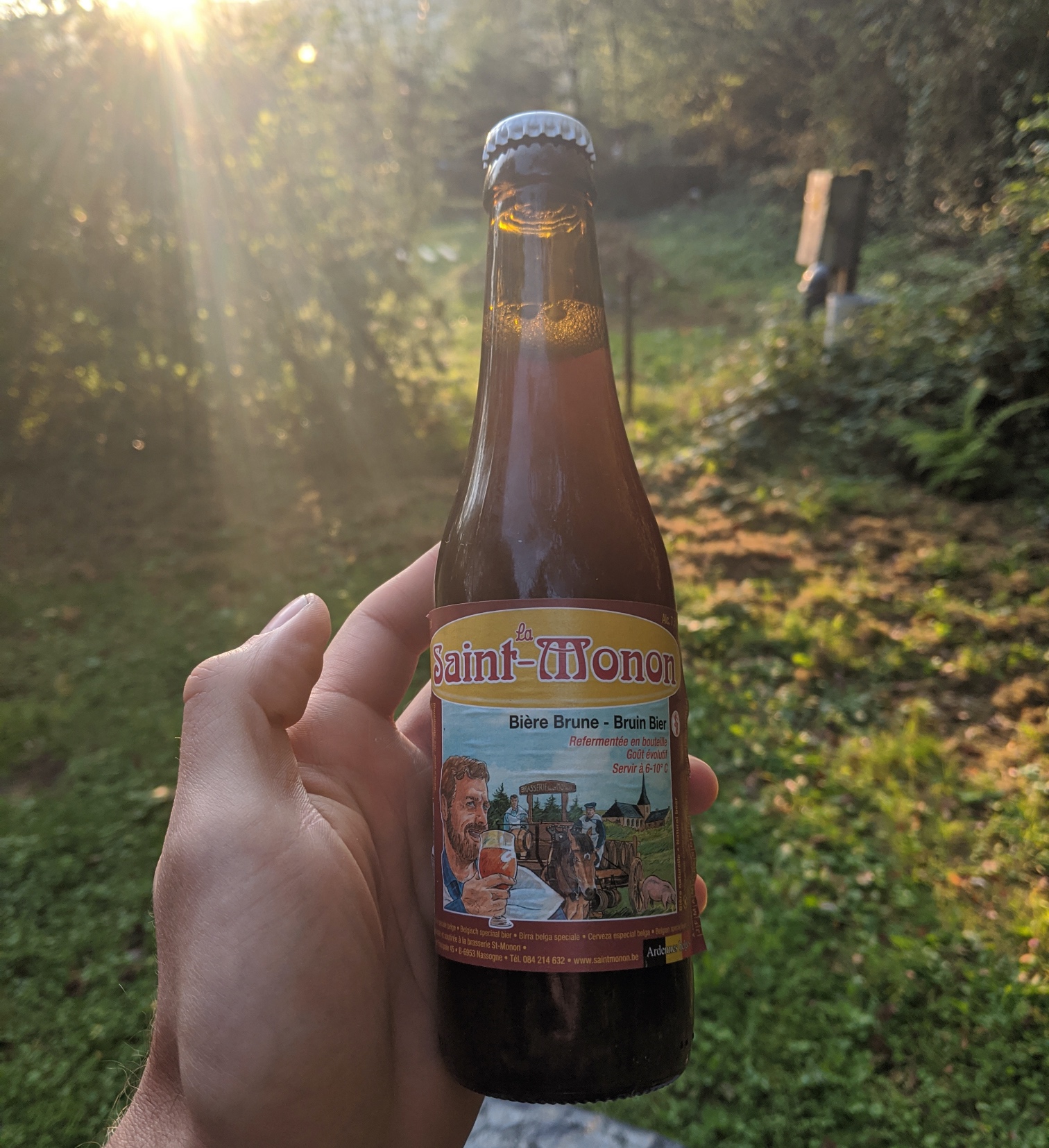 Breakfast of champions. The brown went amazingly well with waffles.

I biked to the bikeshop and went in. The guy took a look at my front brake, pulled out his multitool, tightened the screw holding the wheel in place (which I had removed when replacing my innertube), and looked up to me and said «Voila.»

I thanked him sheepishly and left.

Today was going to be hotter still, 34C. I sketched out a direct route to Givet, my destination in France. The day started on a beautiful RaVEL path from Rochefort to Houyot, which I completed in no time. It was completely flat, if not slightly downhill. The path was called le chemin de fer, the iron path. It followed an old train route between the villages. The tracks were paved over, but the original steel rivet bridges were still intact.

When I arrived in Houyout I stopped at an intersection to head towards Givet. A middle aged guy started talking to me in french. I did not understand him, so I apologized, and told him my french was very bad. He continued on undeterred.

I told him where I was going, and pointed down the road I was planning on taking. He immediately warned me that my chosen path was about 3km straight up, followed by 3km straight down; the 3km down were too steep to bike. He tells me to head back on the path I just took and take a different RAVeL path towards Beauraing, which would be almost entirely flat.

He asked if I was belgian. I told him I was american. He was flabbergasted, and complimented me on my french. I didn’t tell him it was 6 months worth of duolingo. He probably wouldn’t have known what it was, anyway.

He told me about the big USA tour he took 35 years prior. He went to California, down the coast, into Tijuana and Mexico, back up into the USA, and over to New York. He didn’t know where Minnesota was.

I’m not sure he knew where Chicago was, either.

He used to run marathons until the cartilege in his right knee went. He ran a half marathon in Berlin and liked the city.

The man’s name was Philippe. He had white hair with streaks of grey pulled back in a ponytail, a grey mustache, and a white goatee. He still seemed to be fairly fit. He was on his bike.

I told him I should get going, and that it was very nice to meet him. He said he was headed in the same direction and would take me to the turn-off on my new route.

We didn’t speak much more while riding. We had hit the limit of our small talk and my french. We did agree that belgium makes the best beer in the world, however. He reassured me that germans made very good pils. He was proud to tell me that belgium has 1000 breweries, which is pretty impressive for a relatively small country.

At the turn he repeated the directions to me. We shook hands, wished each other a nice day, and went our separate ways.

The route was smooth and easy. I could almost cycle faster than the heat rising up off the black surface.

I crossed into france. A couple kilometers from the campsite there was a mcdonalds, which meant air conditioning, wifi, and ice cream.

The campsite was a short ride south of Givet on the other side of the river, on my bike path for the next couple days: la voie verte. It starts in Givet and follows the river, winding village to village.

I rolled into the campsite at around 1:30pm, peak heat, and no shade. It felt like every scene in “For a Few Dollars More”. The owner sat facing the river and fortress rising high up over Givet on the opposite bank. He was eating lunch with his wife. He’s shirtless under the veranda. 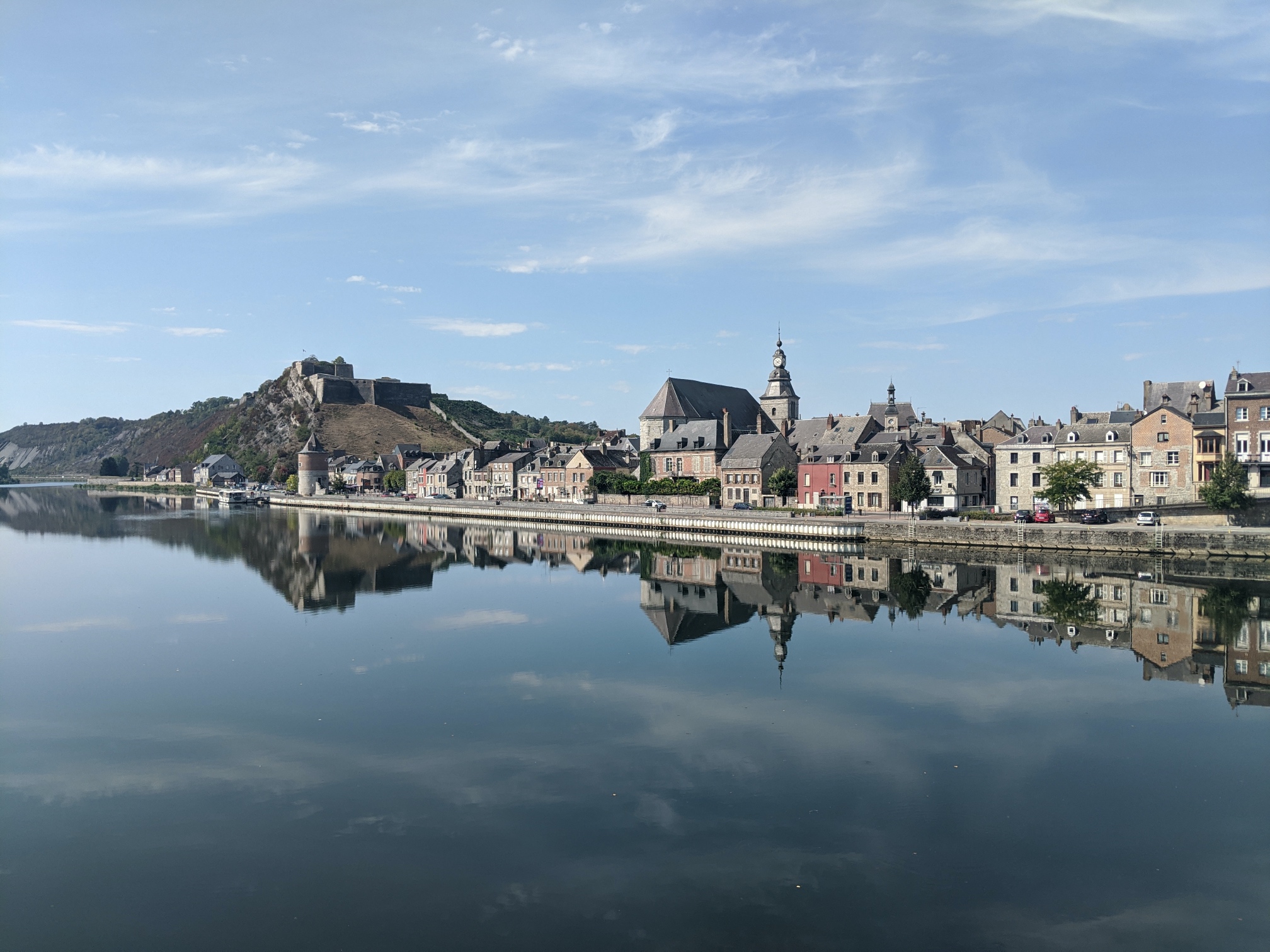 View across the river to Givet and the fortress overlooking it.

I got as far as “Hello, I would like to..” before he waved his arm towards the open camping spots, not attempting to rise, as if to say “wherever you want.”

I found a shaded spot and dropped off my stuff. I refilled my water bottle and took a drink, then washed the salt and dust from my face and neck. I remounted my bike to head into town for a beer.

This trip has hit some low lows: Popping a tire and being unable to repair it, and then popping my tire again two days later; wondering why I’m really out here – why french, why biking, why alone.

Despite the fear and doubt, and the trip’s questionable impetus, it’s turning into something really special: freedom.

Freedom from obligation (go where I want, when I want .. or just stay somewhere); freedom from most of the trappings of modern life.1

I still miss friends and family. I’m still stupidly hung up on Alice, despite having “broken up” longer ago than the time we actually spent together. But I’m really only lonely when other people are around. When I’m riding through sweltering cornfields on a thin strip of concrete overlooking rolling fields and green forests, I’m at peace. Seems my thoughts only catch me when I’m standing still.

I don’t think I’m going to find a job I’m excited about.

But I think I have a career where I can work and take unpaid leave and still come out ahead.