A Day in Reims

I woke up and had coffee in the airbnb. That was a delightful way to start the day. It’s going to be interesting going back to camping, albeit for only one night.

I started considering my next residence after this bike trip. I was planning on Warsaw / Krakow, but actually a month rental in Paris is under 1000EUR, and pretty centrally located. It’s definitely something to consider, but the cost of everything will be a lot more – probably 2-3x more than Poland. Just the airbnb rental in warsaw is half of the cost of one in Paris, not even considering food and beer.

But living in Paris for a month is taking root. Or maybe I’ll just do both.

My route tomorrow looks long. Train from Reims to Charleville-Mézière, then a local ardenne train to Fumay – from there I am on an international bike route to Gedinne (where Bert lives, will say hi and maybe grab lunch?), then off to the bivouac campsite, Bivak Bois de Bané. 60km all told, well within my range, and mostly flat after the initial elevation gain/drop when crossing from France back into Belgium.

We had a fairly chill Sunday. We started with beer and poutine at Les 3 Brasseurs. The poutine was good but not actually poutine – it was fries with shredded bbq beef on top, and a melted mix of mozzarella and cheddar cheeses. The beer was fine. The blonde was a blonde, but the IPA was definitely a European IPA. Low on bitterness, and with a flavor that disappears real quick.

We had a champagne tasting that we had to arrive for between 14:00 and 16:30. Still before 13:00, we headed to the cathedral to check it out. I found the architecture very nice, and the size super impressive. 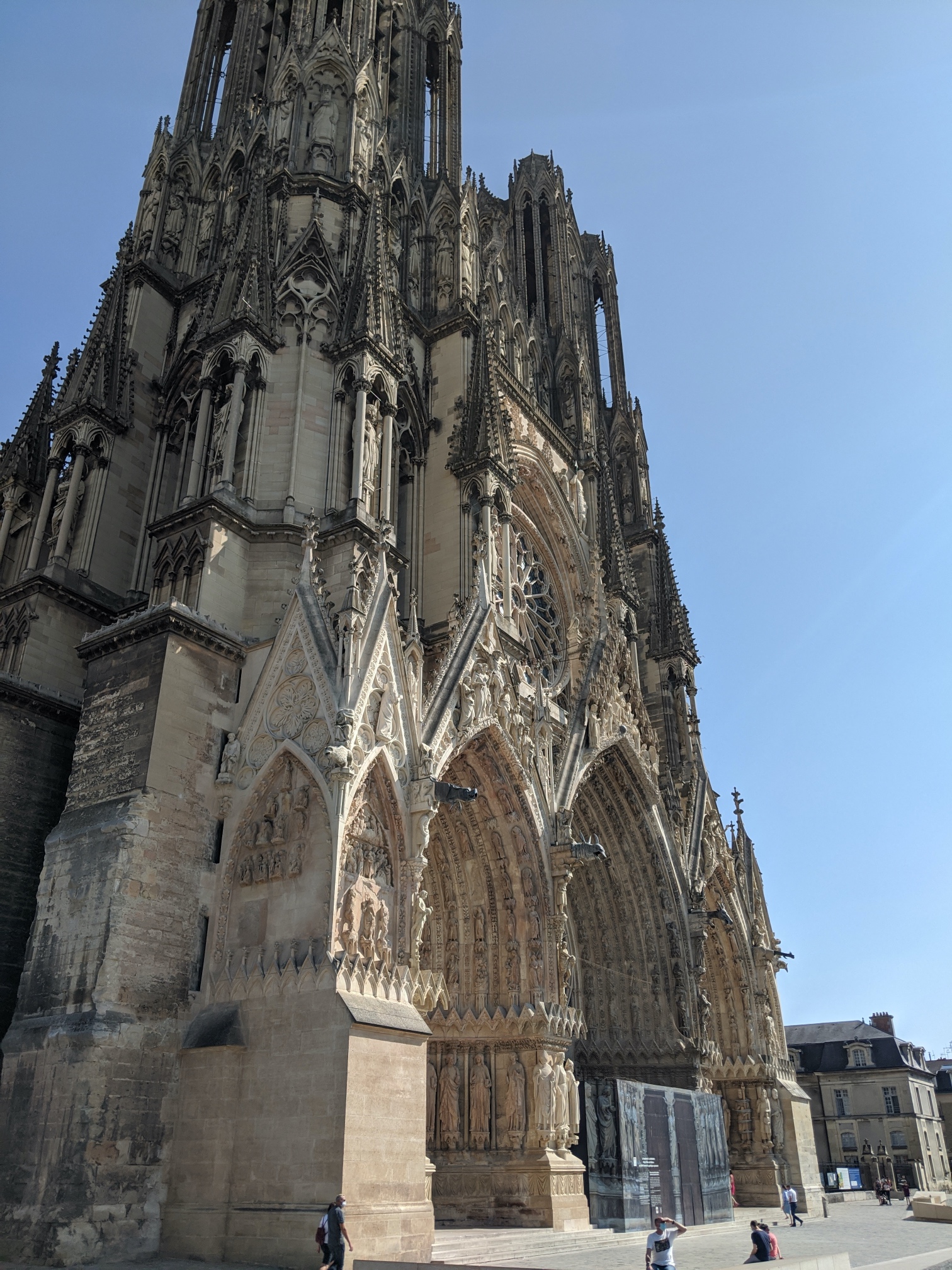 Rather impressive cathedral in Reims.

Out front there were two stone tablets inlaid in the ground before the cathedral entrance. They signified the start of reconciliation between france and germany. 1962, 17 years after Berlin surrendered, and very close to when the berlin wall went up.

Stone tablets before the cathedral commemorating germany and france seeking to reconcile after world war 2.

We walked on to Basilique Saint-Remy. Older, less impressive, but still cool. Literally and figuratively. Although it was only 28C outside, it was hot out on the street in pants and a flannel (flannel was the only non-under armour option I had on the trip).

The champagne tasting was at Domaine Vranken Pommery. The place was huge, but we were only allowed into a single sort of entrance hall. Reception on the left when you enter, exit through the gift shop on the right. In front of us was a massive room with some art, a few sofas, and massive display barrels on the wall to the right.

We headed for the cellar. We descended old stairs, the middle of the step worn away by all the feet from the past 200 years.

Lights lined the handrails. They were programmed to strobe up and down the length of the ~80m stairway. This struck me as odd.

As we moved from dank dark room to dank dark room, it dawned on me that this was an art installation with some champagne bottles lying around, and not (really) a champagne cellar that had some art here and there.

Rooms for storing champagne were named by cities or areas – Zürich, Munich, Manchester, Île-de-France. This was ostensibly for organization and not actually denoting the bottles' intended destination.

These rooms were connected by a long arched hallway. The hallway was lined with cubic stacks of dusty champagne bottles, stacked on their sides and set atop eachother alternating cork-facing-out and cork-facing-in to stack the bottles more tightly. The stacks were to about waist height. High up on one side where the wall meets the ceiling a long rope pulley ran the length of the hall. Wicker baskets for moving bottles were spaced every meter or so along the rope.

There were massive square topped pyramidal chambers for aging champagne, easily 60m high. The temperature year round is about 10C, and the air is damp. Each chamber had some piece of art in it. The art was unsettling (or maybe it was just the berlin club-esque atmosphere), but I enjoyed it immensely.

After wandering in the gloom we ascended the stairs to the light and drank some champagne.

We returned to the main area in the city and visited the Porte de Mars and walked down the main cafe/restaurant street.

This and the champagne cellar made the whole day feel surreal. Walking in the cellar with the lights and art and dark felt like being in some sort of disneyland haunted mansion. Returning to the city, with its single populated street full of people in cafes and deserted intersecting side streets, completed the “France-land” disney vibe. It had all the things to be french but felt staged or counterfeit. 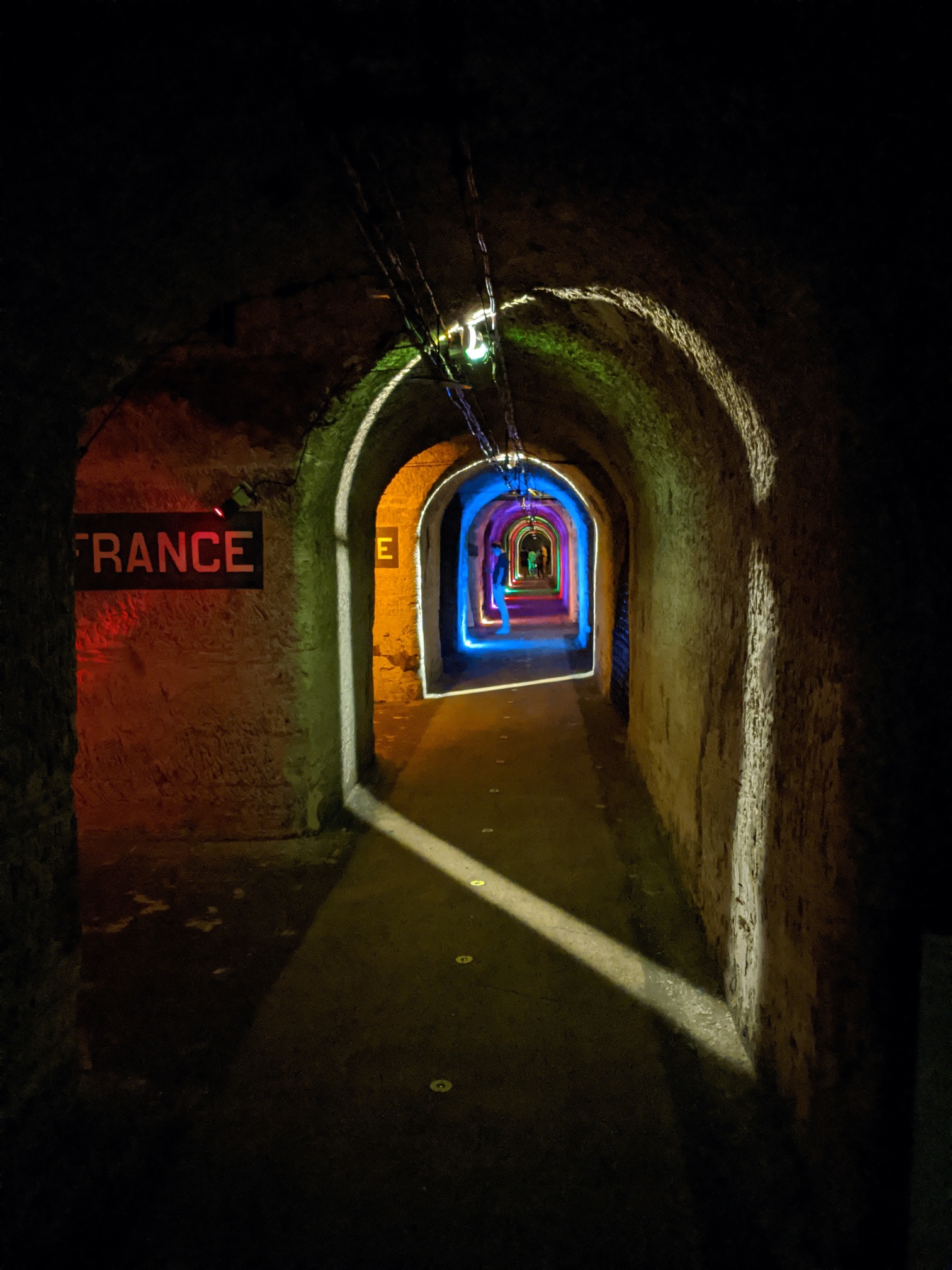 One of the colorful parts that contributed to the otherworldliness of the champagne cellar.

We sat at the cafe hemingway and drank beer and talked. Etienne is freelancing, so we semi-joked about freelancing together. Relaxing in paris for a bit doing some side work to afford a nicer bottle of wine with dinner sounds pretty good. Maybe i’ll start october in Poland, head back to berlin for my birthday, then go to paris until it’s time to visit Alex for christmas. I just need to keep an eye on quarantine restrictions for heading back to Berlin from Paris. Poland, as of this writing, has no quarantine restrictions.

We drank and ate. It was a good end to the day.